This paper is focused on investment attraction, and more particularly on the role - which is considered essential - of external companies, national and foreign, for the recovery of the industrial development process of Southern Italy. The further growth of the size of the southern industrial apparatus is in fact today, even more than in the past, an unavoidable question, as the dramatic effects of the great crisis hit the South much more heavily than the rest of the country, leaving in the field a production system, even more reduced, largely incomplete and definitely insufficient for the needs of the area. Therefore, it seems useful to retrace the events that have marked the link between industrial development in the South and investments and businesses that are external to it, in light of the different seasons that have marked the evolution of direct interventions of industrial policies. In this last regard, it is believed that an important role is played by the overall framework of the facilitation system, as it aims to increase the convenience of the location of investments. The following periods are retraced: the season of the '60s and the first half of the following decade of intense industrialization of the South, which made it possible to localize a modern industry in the South in the basic sectors functional to the whole country, thanks above all to the attraction of medium-sized or large factories owned by proprietors outside the area; the 1980s, characterized by a general weakening of industrial policy, which did not prevent the introduction in 1986 of a specific instrument for attracting investments in the South - the programme contract - which, until the early 1990s, produced effects that 399 are not completely negligible; in the first half of the 1990s there was a vacuum in the policies and the action of the programme contracts was strongly weakened; the two thousand years faced strong stagnation, culminating in the great crisis of 2008, up to the interventions put in place since 2016, among which, for the attraction of foreign investments, a key role could be played by the SEZs in particular, as this intervention could partly contribute to compensating the serious tax dumping suffered by southern regions, especially with regard to the East countries, and by startups and innovative SMEs, as potential partners of large and medium-large enterprises. 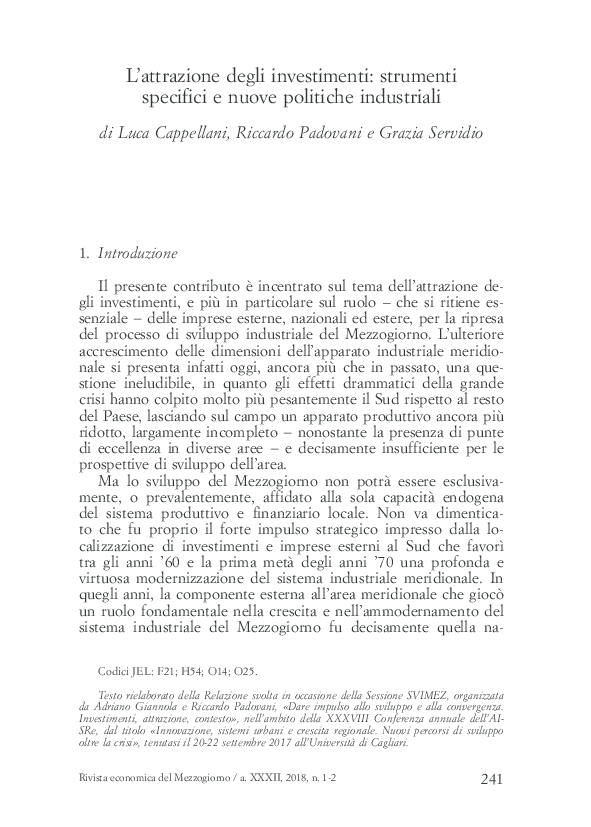