Italy, after the recession that has produced the devastating effects of a sevenyear war, is starting on a path of economic growth. These are the first signs of a recovery that urgently needs to increase its production capacity and significantly improve the competitiveness and productivity of the system, to consolidate and restart the entire system, and especially southern Italy, on a long path of development and territorial convergence. In such a context, the economic revival of the South cannot but go through a more dynamic interpretation of the conditions of strategic positioning within excellence networks for trade throughout the world. Attracting foreign production capital, stimulating and facilitating the return processes of Italian offshoring activities are a way to help recover development. How can we manage it, and where? Territorial Supply Chains proposed by SVIMEZ represent an instrument for the development of the economy and society of a large area. Territorial supply chains possibly concentrate downstream the common supply chain activities while strictly maintaining industrial processes upstream. Downstream these activities are concentrated in port areas, or better, inland, if existing, such as distriparks, logistics hubs, dedicated terminals, in terms of tax advantages derived, for example, from the creation of a Special Economic Zone following the example of many successful cases (some thousands globally but Poland, Morocco, China and the Netherlands stand out). The development of activities in the Mediterranean in the near future will be increasingly influenced by the initiatives launched by China and aimed at supporting the weight of its economy in the largest and richest world market, i.e. Europe. The Silk Road traced by the Chinese risks marginalizing the role of port facilities and Southern economy. A possible strategy to counter this dangerous drift is represented by the creation of corridors that are transversal to the Mediterranean basin that would pivot on the southern port system. The underlying theme of such strategy will be the concept of «transversality». In particular, we will refer to a series of multimodal/ co-modal corridors articulated on transversal itineraries and longitudinal itineraries that go across Italy and link it to Europe and Africa and which find the general reference pointin the maritime economy. 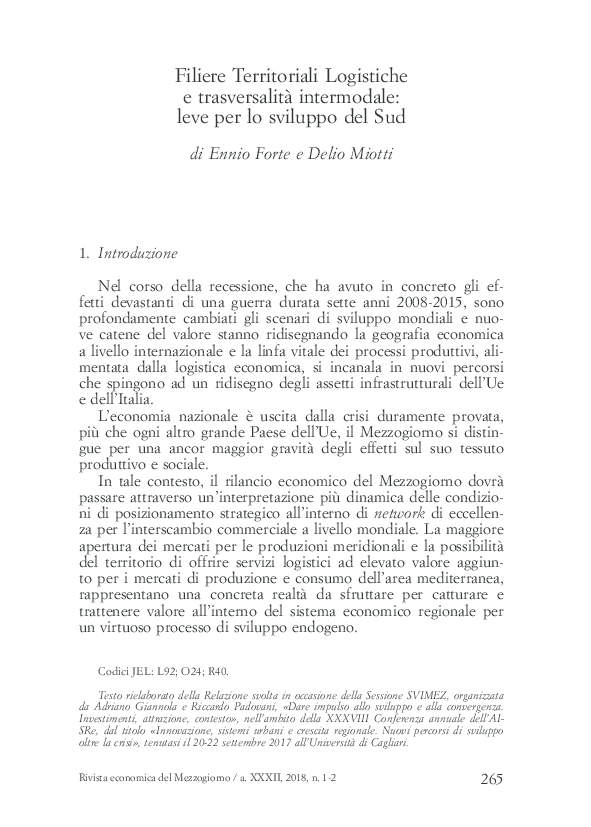