Art. 27 of the law decree 19/5/2020 n. 34 «authorized» Cassa Depositi e Prestiti S.p.A. (Cdp) to set up a «designated asset» («Patrimonio Rilancio») through the public resources conferred by the Ministry of Economy and Finance (M ef ), in order «to support and relaunch the Italian economic and productive system». Namely, C dp can use such resources to «underwrite convertible bonds; participate in capital increases; purchase shares listed on the secondary market, in case of strategic transactions» in the companies indicated under art. 27 itself, provided that the conditions set forth under the European Commission’s Temporary Framework on State aids are met. «Access requirements, conditions, criteria and methods of interventions» of Patrimonio Rilancio will be defined by a decree of the M ef . This discipline seems to be destined to mark a significant discontinuity in the legal system, following an approach that is in many ways «eccentric» to the doctrinal and case-law elaboration consolidated over the last 30 years (and systematized in the legislative decree 175/2016). The scheme designed by art. 27 appears intrinsically ambivalent, intertwining several public and private issues: its implementation is entrusted to C dp , a private company (albeit of singular law and subject to M ef ’s control) which will acquire shares through private law tools and, if possible, under «market conditions» (or according to the Temporary Framework, anyway), but using significant State resources and with a view of satisfying a specific public interest, according to the priorities set out by the Government’s «control room». The article proposes some reflections on the possible effects of such regulatory inter- vention – which objectively seems to lead to a re-expansion of the phenomenon of State shareholding – suggesting measures to reduce their most critical anticompetitive concerns. More in general, the paper remarks how such discipline, along with other (pre and post C ovid ) recent developments, contributes to the modification of the economic constitution and the relationship between State and Market. 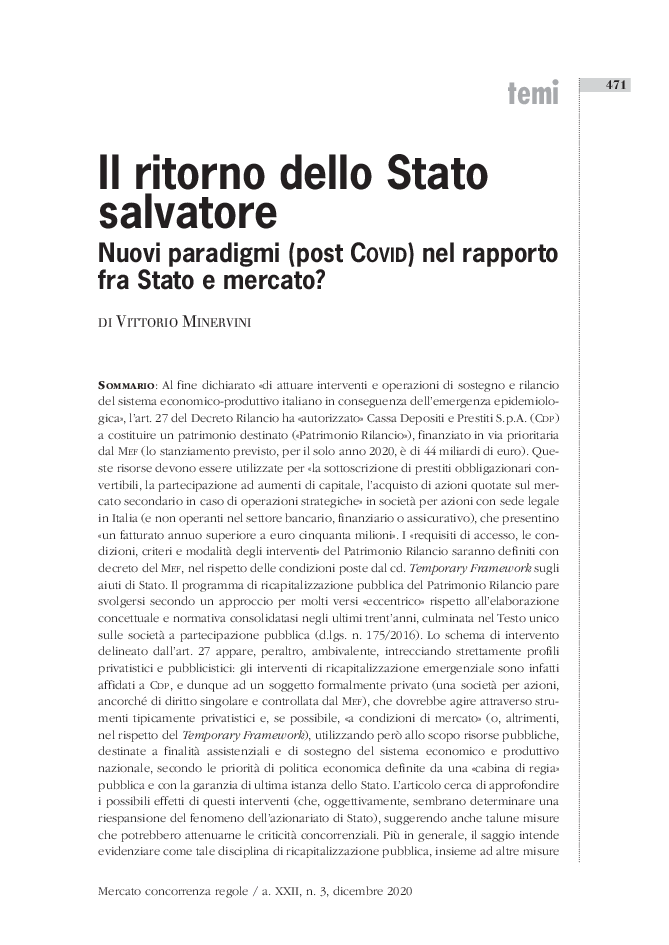