In the wake of what can be termed a «teutonic saga», the Bundesgerichtshof (B gh : Federal Court of Justice) has decided, in summary proceedings (that go well beyond their typical coverage, canvassing the whole contentious area), that the Bundeskartellamt (B k art a : Federal Cartel Office) was entitled to prohibit, as a violation of German competition law, Facebook’s data policy of combining personal data of its customers with additional data collected offline without their explicit consent. The ruling is a complete rejection of an earlier decision by the Oberlandesgericht Düsseldorf (O lg : Higher Regional Court), which had strongly criticized and suspended the Bundeskartellamt’s injunction. The verdict of the B gh does not close the confrontation, since the O lg has not yet decided on the merits of the case (and it is not granted that its decision will conform to the many obiter dicta of a ruling that should have been pronounced only on the suspension of the provision imposed by the B k art a ). Moreover, the O lg might decide on the main proceedings even before Facebook begins to fully implement the ban on building superprofiles of all its users. Beyond the final outcome of the dispute, it is questionable whether the prohibition of abuse of dominance in competition law is the most appropriate legal instrument to guarantee the lawfulness of the collection and transmission of private data and to protect the privacy of consumers who use social media. Even where there is evidence of real market power, there must be a causal link between the hegemonic position and the alleged abuse. And if the protection of privacy is lacking even in competitive markets, the requirement of causation appears to be problematic to satisfy. Unless we accept a weakening of it, with a sleight of hand which, however, triggers the legitimate concern of a subversion of competition law: a violation of the right to privacy should not be disguised as an anticompetitive offense. The main problem with the decisions of both the B k art a and the B gh is that neither of them convincingly demonstrates the harm to competition caused by the breach of the contractual terms on privacy. The real cause of the deterioration of their quality is not the lack of competition, but the information asymmetry that afflicts users of digital services, unaware of the value of the information they transmit to allow the construction of super-profiles. Direct regulation of the general terms and conditions requires much simpler assessments, in terms of imbalance of rights and obligations, prohibiting irrational clauses that an informed consumer (almost an aporia, in most cases) would never have accepted. Recourse to competition law is an indirect way of obtaining such results. If the corrective action were to really go through the use of competition law, the risk would become substantial that the authority responsible for its enforcement, rather than repressing an abuse of dominant position by some Internet giant, would itself abuse the antitrust law. 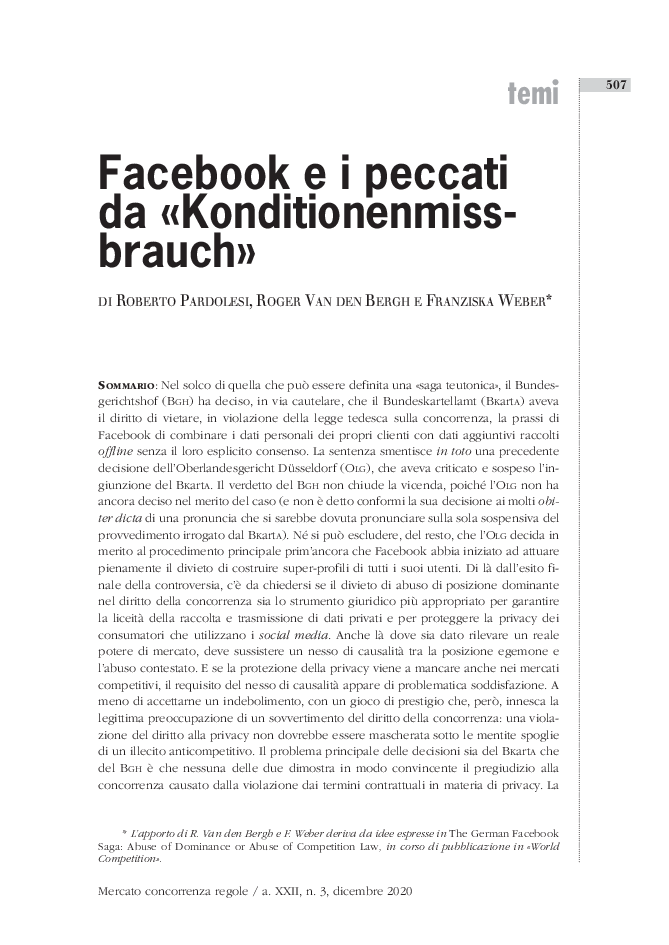