New digital technologies are supposed to bring a significant improvement to people quality life. In this perspective, the fifth generation of mobile technologies (5G) is called to play an important role. However, together with the advantages, many risks may be identified, starting with those related to human health, security and social exclusion. Such issues are often interlinked between each other. The paper focuses specifically on some of those issues, and namely digital divide and electromagnetic radiation, taking into account data, scientific studies and both domestic and EU case- law, where relevant. The view that both digital divide and electromagnetic radiation negative effects can be excluded (or at least minimised) through a more active role of the State and its public bodies is forcefully upheld. Digital skills and human health are both goods relevant under a constitutional point of view, and their implementation cannot be left in the hands of market forces. For both issues, a certain degree of inertia by legislators and regulators in dealing with such matters has been pointed out in this work. In this respect, some legal remedies have been put forward. On one side, both health and digital literacy may be seen as a «new commons». On the other side, constitutional and administrative remedies have been discussed in the work. As for the former, the analysis focuses on legislative omissions and the role of the Constitutional Court; with regards to the latter, the analysis specifically focused on the precautionary principle. It has been highlighted that the implementation of 5G is not based on preliminary administrative investigations at domestic and at EU levels. This makes the role of the principle at stake of paramount importance, until the potential negative effects for human health have been scientifically and independently clarified. 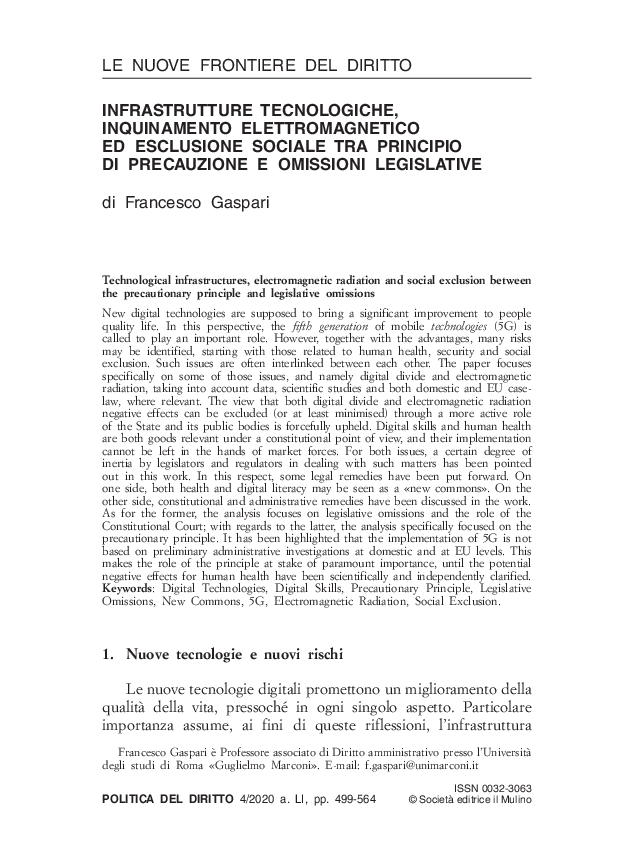