In the author's view, general discourse on the ends and values of the European Union cannot take place merely on the basis of the normative text before our eyes and the subject of intergovernmental negotiation, but must take place in consideration of the political relations which, upon becoming effective, will be brought about between the States - still the holders of sovereign power - and the European institutions, whose powers are defined by the same text. In other words, what is involved is not just recognising that certain values are considered proper to the Union - in addition to the States - and that they inspire its action in the pursuit of the objectives indicated (Art. 3), but also verifying, on the one hand, "if" and, on the other, "how" these values will be interpreted and realised by the Union, and what sort of equilibria between the Union itself and the States will be produced as a result of their pursuit. In this perspective - which evidently has to do with the unforeseeable future arrangement of European institutions - it may be useful to reflect on both the way in which integration has progressed to date and on the provisions of the project that in future times will be able to set the course for the successive phases and, above all, the political equilibria within the Union. Regarding the first point, the capacity for expansion of Community competencies and ends is underlined, to date already manifested in the application of the establishing treaties of the European Communities and then of the later treaties. In addition, the author observes that even in terms of the creation of a political system it obviously will not suffice to state the pre-eminence of its norms over Member State norms, nor the implications in terms of their direct enforceability and of the non-enforceability of conflicting national norms, etc. It is likewise necessary that the "societas" that recognises itself in it express autonomous substantive values vis-à-vis the collectivites that compose it: in other words, it is necessary, as has been repeatedly and critically underlined in the doctrine, for a feeling of belonging to a common organisation to take root among the consociated, and for that sentiment to be not merely occasional but structural and ideal, with the same applying above all to an awareness of a common destiny. In this perspective it is possible to explain and find a justification for the current of Community jurisprudence in the area of fundamental rights and the general principles common to the Member States. It tends to touch off a circular process whereby the principles and values dealt with in the national constitutions get re-elaborated by Community judges and then imposed, by the force of their rulings, on those professionally involved in national legal affairs. In this sense the indication regarding common values contained in the constitutional treaty project becomes important; in particular, the author observes how the principle of attribution and the primacy of European law constitute the way to shift the constitutional centre of gravity from the States to the Union, or, to put it better, from the national constitutions to the European constitution. 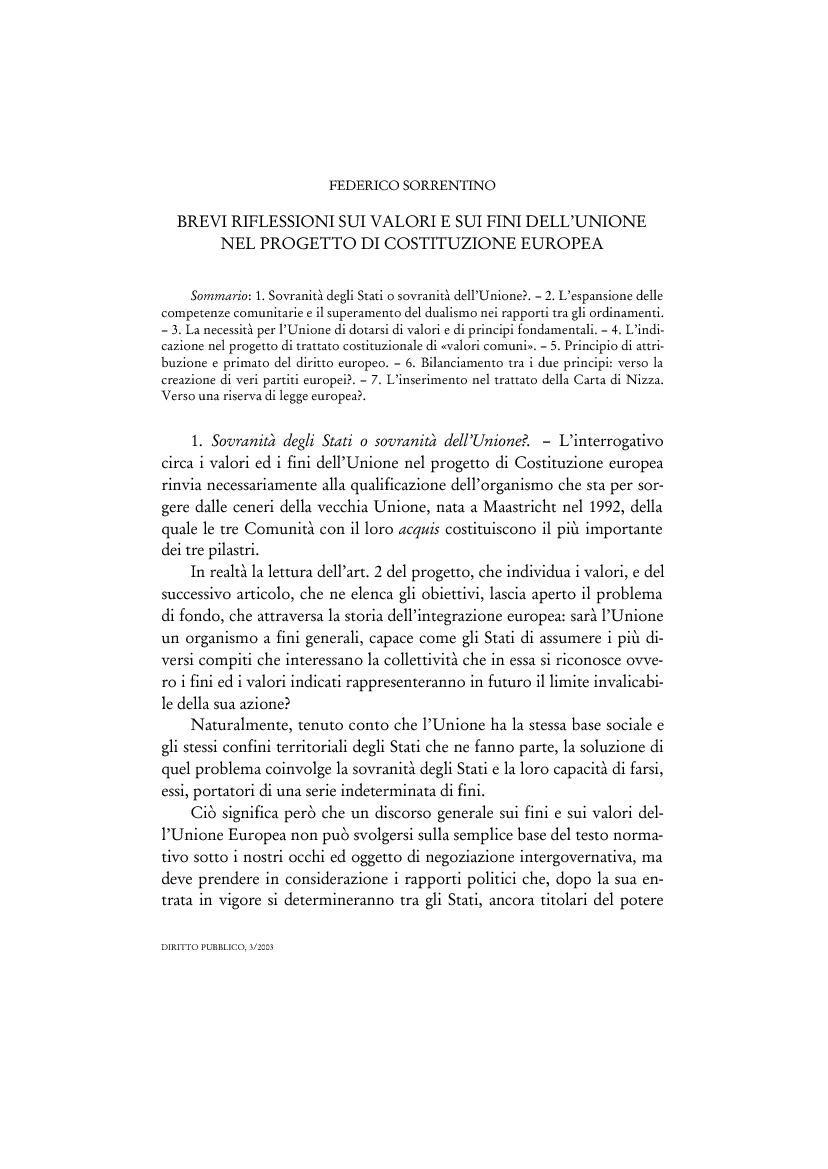