The whole history of modern constitutionalism develops around a certain idea of citizenship, and it is by following the transformations of citizenship that it is possible to reconstruct the events that mark the evolution - but also the profound crisis - that constitutionalism is undergoing in this age of transition. The crisis involves its founding paradigms. For the author it thus becomes opportune, first of all, to specify what idea of citizenship is being referred to and what the other possible meanings are. On the plane of the rights and duties of the consociates, in particular, the notion of citizenship has a quid that also plays a role in closely linking the concept to the evolutionary nature of legal history. Citizenship it thought to represent a prius with respect to the enjoyment of all or part of personal rights, as well as of duties vis-à-vis the community. Wanting to take this perspective to extremes, one can thus go so far as to assert that the history of citizenship ends up coinciding with the history of law tout court, or at least with the history of its ideological presentation, with the history of legal civilization. The author nonetheless limits the scope of reflection to the narrower issue of citizenship as a concept having its own specificity, recalling the two principal meanings that underlie the reflection on citizenship: 1) citizenship as 'belonging'; 2) citizenship as 'participation.' Even though they are not mutually exclusive, each has a history of its own and an unlike conceptual framework, whose different contents the work examines. To conclude, the author asks himself if the time has not come to abandon any reconstruction founded on considerations of 'abstract' principle or exclusively formal. The same conceptual dichotomy that up to now has defined the field of the acquisition of citizenship - ius sanguinis/ius soli - by now shows a progressive erosion of meaning. Likewise, the distinction between immigration policies and policies for immigrants appears more and more vague: indeed, the supposition that only the latter have to do with citizenship policies no longer is on solid ground. In the author's opinion, it is necessary to begin to think of an open citizenship, no longer definable in terms of State-based right but instead linked to personal rights and civil life in common of those residing in a certain place and time. 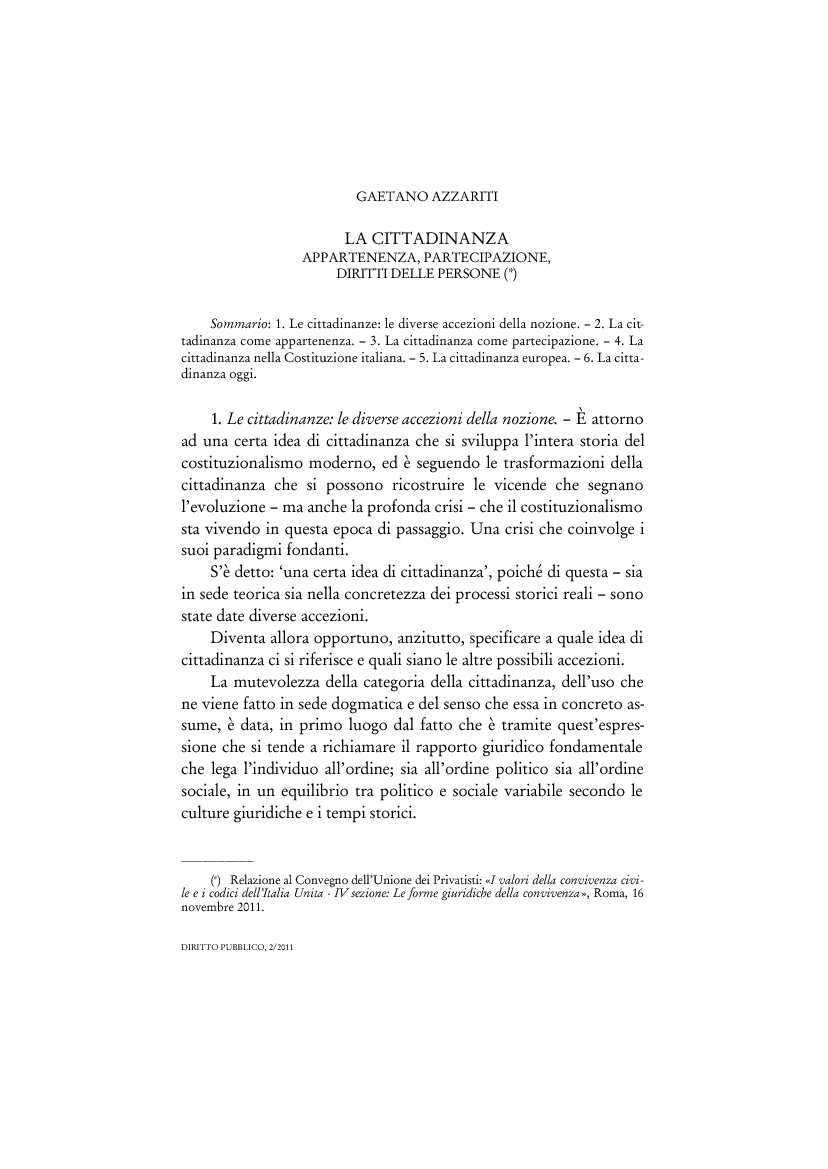