The analysis has as its object not social rights in general and the principle of subsidiarity the fullest sense, but rather the times when the two overlap, if indeed they do. Through an examination of the phenomenon in view of constitutional and Community norms, the author observes that the principle of subsidiarity (both vertical and horizontal) does not posit a material criterion, but just a procedural one: that is, it does not spell out for each activity of general interest what choice must be made between public subject or private subject (or among more than one public subjects), but does say what line of reasoning must be followed in order to reach such decision. Since the evaluations to be made are broadly discretionary, at least three important consequences follow on the juridical plane (but also on the political plane): 1) it is up to representative political subjects (first and foremost national or regional legislators) both to directly appraise the potentialities of the private subjects in reference to specific activities of general interest, and to outline the procedures which the public authorities must follow when this choice is delegated to them; 2) the reasons for normative acts ought to be explained, just as are Community regulations: only thus does it become possible to verify whether the line of reasoning imposed by the principle of subsidiarity has or has not been respected; in any case, those administrative acts which must apply the principle must specifically justify the reasons therefor on this point; 3) jurisdictional control over the enforcement of the principle of subsidiarity cannot but be a control over the reasonableness of the laws or of acts having the force of law performed by the Constitutional Court, or else a control over excessive power relative to administrative acts. At the same time the analysis demonstrates that there are cases provided for by the Constitution (or by Community treaties) where the principle does not apply, and the choice of the subject duly awarded a given activity has already been made without the political subject being able to bring it up for discussion again; 2) that there are arguments that cannot be used because they clash with principles and rules that are constitutional in nature; 3) that there are instead arguments that must necessarily be given consideration because they derive from constitutional (or Community) principles and rules. 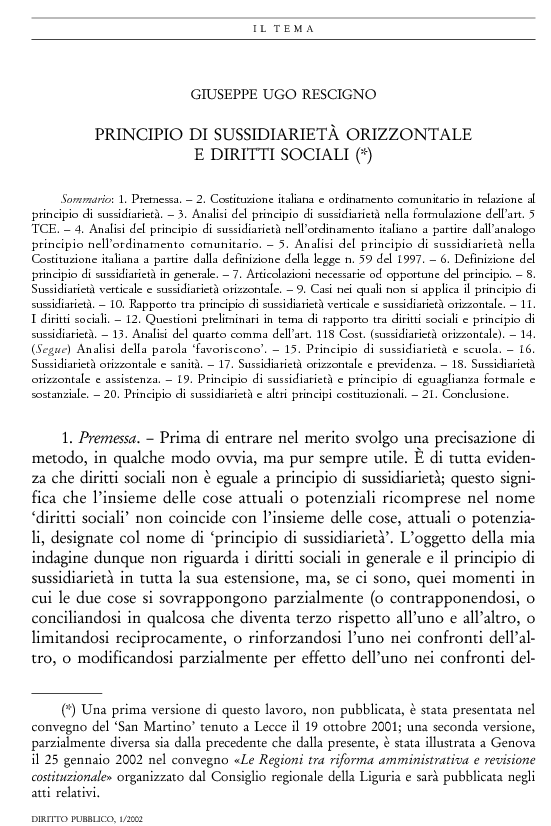