The author examines the debate over the meaning and value of the principle of subsidiarity, which is rather recent to Italy and was stirred up above all by the introduction of the principle in the Treaty of Maastricht, where it is indicated as the criterion to be used for the distribution of competencies between the European Union and the Member States. In recent times in Italy, as well as in other countries, reflections on subsidiarity have undergone (or are undergoing) acceleration and considerable increase. The discussion both political and scholarly has prevalently developed with reference to the application of the principle as a rule for the attribution of competencies between the State and regions; so-defined (vertical subsidiarity), and analogous to what has been affirmed by the European Union regarding its relations with the Member States, the principle seems to have easily made its way into Italian juridical culture and into legislation for administrative reorganisation. Much more vexed and heated instead has been the confrontation over the appropriateness of introducing into the Italian legal system (especially though norms having constitutional status) the principle of subsidiarity as a criterion which, in the definition of relations between the sphere of public intervention and society initiative (with this latter being understood as including both social organisations and individuals), provides for the "priority" of the latter and the "residual nature", or, in any case, the "secondary" role of the former ((horizontal subsidiarity). Most studies concerning the principle of subsidiarity have examined the problems it poses without making the proper distinction between the values inherent in vertical and horizontal subsidiarity, which goes to the original core of the very principle. In reality, even though the two different dimensions of the notion are strictly correlated they cannot be properly considered as two different applications of the same principle since they refer to two very different spheres, with vertical subsidiarity regarding the criteria for the distribution of competencies between or among public subjects, and horizontal subsidiarity regarding the relation between public and private intervention. The two different themes summon up different juridical principles and constitutional issues; the fact that the principle of the underlying structure of each presents common traits does not suffice to justify a unitary analysis of the two. Based on this general approach, the author mainly considers the problems posed by the concept of horizontal subsidiarity, proceeding to analyse the possible implications thereof and then attempting to examine the way in which our legal system's norms dealing with the notion have made reference to it and the meaning they have attributed to it, with a review of such norms contained in ordinary legislation in recent years, including the most recent provision introduced in the new formulation of Article 118 of the Constitution by Constitutional Law No. 3/2001 for the reform of Section V of the Constitution. The theme is rife with implications in relation to manifold sectors where public and private intervention co-exist and converge; however, it is particularly relevant in reference to areas of activity which bear on the realisation and guarantee of social rights, which constitute the background against which must be viewed the reflections that follow: it is no mere happenstance that the principle of subsidiarity applied to relations between public and private subjects has found its most complete formulation in the Italian system in legislation referring to social services. 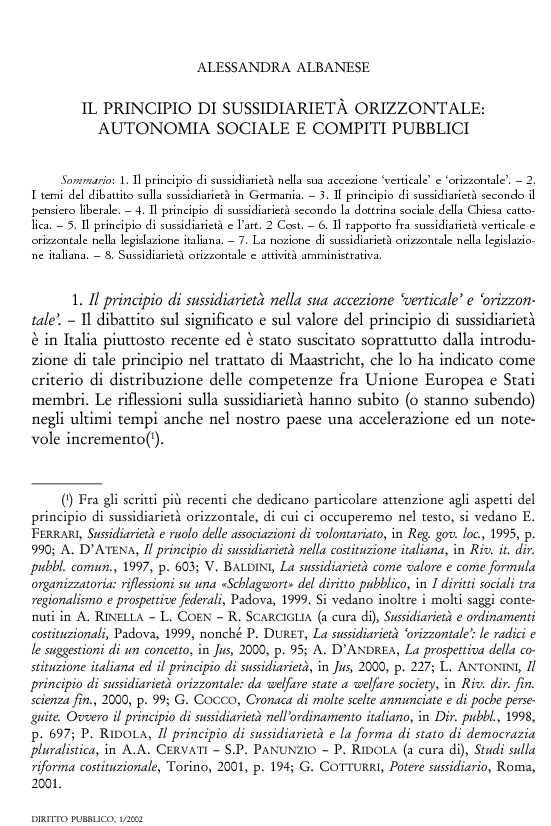