The author reviews the stages in the development of the public health system beginning with the 1978 reform: from attention to the way in which steps have been taken over time to try to "rationalise" the service, it can be said that there has been progressive movement in the direction of goals inspired by the principle of vertical subsidiarity on the one hand, and horizontal subsidiarity on the other. Today even a superficial comparison of the law known as Law no. 833/1978 and the recent Law no. 328/2000 on the system of services to persons, suffices for one to immediately perceive a fundamental difference in the approach to the problem. In the first case, the national public health service appears designed in its divisions, and in its basic functions in terms of organisation and operation - even though involving the State, Regions and Communes - as a service governed from the centre in line with the "top-down" model. It is managed by means of uniform public administrative structures; it is formally controlled in terms of individual acts and services provided. In the second case, aforesaid Law No. 328 operates from a different outlook: from the perspective of wanting to realise a system of services aimed at the person according to a network model that would give preference to - even though within the framework of overall unity in the governance of the system - initiative on the part of those same persons entitled to the right to social assistance on the basis of a type of planning and management that may differ at the local level (bottom-up). Looking today at the path taken by the national health service under an institutional profile, as well as at the three main functions of government, of management and of control of the service itself, it would appear that an attempt is being made to transform the national public health service from a national service into a system of services the programming, management and control of which acquire different values and are located in seats closer to those entitled to the right to health care and users of the service. The author then observes how experimental programmes are underway having as their object new management models which provide for forms of collaboration between the national health service and private subjects, including through the institution of mixed companies with public and private capital, on the presupposition of the recognition of the limits of the types of services that can or ought to be assured by the public health service as the prelude to the transformation of the service into a mixed form between public management (or public regulation of such management) and social self-management, making horizontal subsidiarity the vehicle for the direct assumption of responsibility for the service on the part of social formations and subjects belonging to the private social sector. In response to government and to programming increasingly local in accordance with the principle of vertical subsidiarity, and in response to management which sees the concurrence of public and private structures according to the requisites possessed by them and the obligations assumed by them in accordance with the principle of horizontal subsidiarity, corresponding parallel transformations in the function of the control of the service have also taken place. Instead of the previous formal control over acts and services performed, control is exercised on management and then on the "quality" of the service, in part to be activated according to modalities and techniques for evaluation drawn from those prevailing in the business world and in part in the form of social control rooted in the local context, so as to obtain indications and evaluations for the purpose of calibrating programming and management and in order to activate a non-formal relation of responsibility with the territory and the community served. 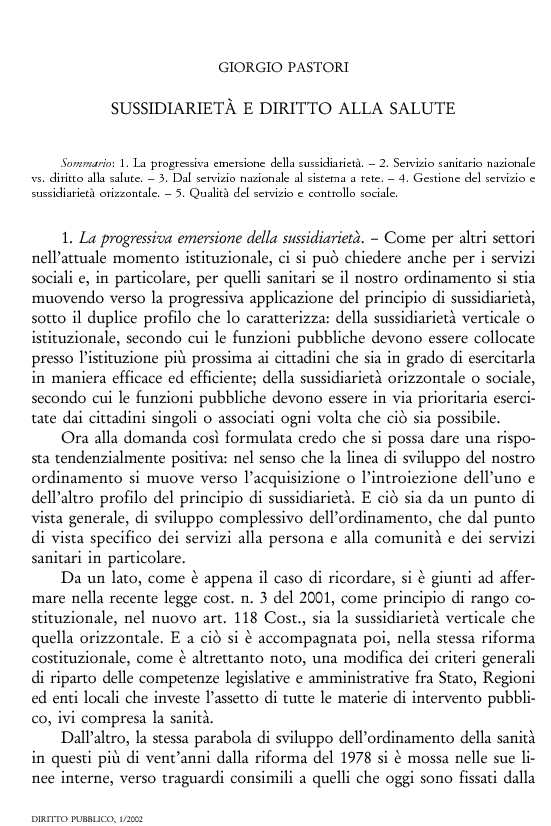