The author analyses the problem of political and penal responsibility in Spain by taking a look at the responsibility of the Head of State and members of government. He observes that legal rules in this field are mostly formal or procedural. They indicate who is subject to political responsibility and how it can be activated. They say very little about what types of behaviour deserve political blame and when they are so serious as to justify dismissal from office. This substantive aspect is not regulated by constitutional law. It is left to constitutional practice, which unfortunately is far from being clear and consistent. Concerning the substantive aspect of political responsibility, the central issue is the link between criminal responsibility and political responsibility. Unquestionably, somebody who is convicted for a very serious crime is disqualified for public office. This is the consequence in strictly legal terms, because disqualification for any sort of public function (e.g., running for elective office, civil service, etc.) is envisaged by the Criminal Code for most serious offences. But what happens before that person is convicted?Should a Minister who is seriously suspected of a crime resign?Should he do so only if the crime is really serious, or if it has to do with his fulfilment of ministerial functions?And, more crucially, should Parliament abstain from examining the case as long as judicial proceedings are pending?None of these questions has ever received a generally accepted answer. Politicians in trouble (and their parties) have mostly tended to invoke the principles of presumption of innocence and judicial independence in order to postpone political responsibility, but such claims have never been fully accepted by the political class as a whole, not to speak of the media and public opinion. So, in actual constitutional practice, one may not say that whenever a case is sub judice the channels of political responsibility are closed. The invocation of pending judicial proceedings as a political argument is unjustified. In very recent times, in addition, it seems to be in decline. However, it has had a strange consequence: once a suspected public official is judicially acquitted, it is extremely difficult to make him politically responsible. The interference of legal considerations in political debates tends to blur a basic distinction of constitutionalism, namely that an action need not be criminal in order to constitute political misconduct. 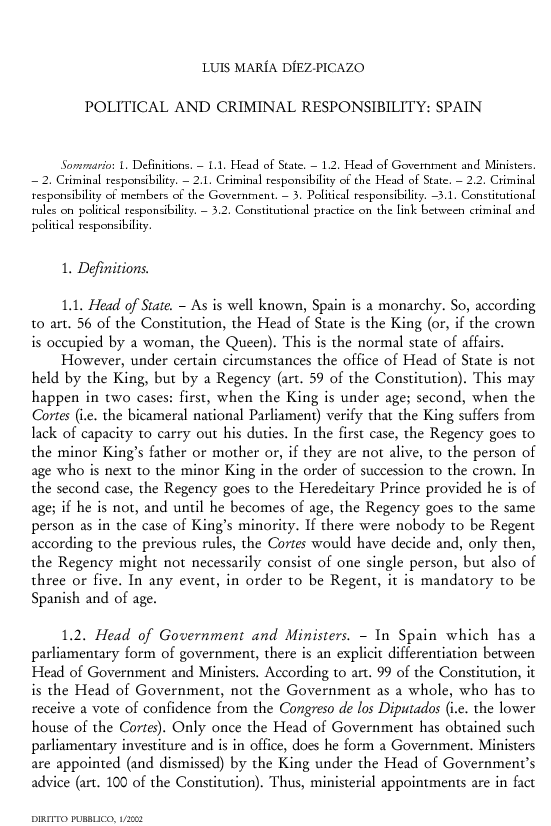