The reform of the norms which provided for it, and now the adoption of a new Code of Conduct for public employees, offer an opportunity to attempt to clarify the role and nature of this device, which to date does not seem to have played a significant role in instilling ethical behaviour in public functionaries, nor in the reduction of phenomena which have been defined in Italian as "corruzione bianca" and "corruzione grigia", literally "white" or "grey corruption", to indicate something less than blatant. At a time when this form of "mild" regulation might be thus recognised as a failure, instead new prospects seem to be opening up for it, as emerges from the reform of the norms which governed the general model, as well as from the spread of this tool through provisions in different sectors, initiatives taken by various public administrations and at times as a result of an impulse from the Community: in short, its propagation came about in public administrations and through public administrations. In the public sector the privatisation of labour relations put into effect in the early 1990s defined a framework wherein it proved difficult to find a suitable place and recognised role for the Code of Conduct, a public source of authority insistent on one theme, that involving discipline once privatisation takes effect. Starting with the problems arising right from the time of its adoption, and in view of the subsequent reforms that have characterised it, it is, however, both possible and correct to recognise the specificity of this tool, which is called upon to define the duties of employees insofar as the public dimension of the exercise of whatever function. The public employee then turns out to be held to obligations which, insofar as they pertain to mere routine job performance, are based on private sources (both negotiated and unilateral), as well as other obligations which, inasmuch as they refer to the exercise of a function in relation to constitutional principles and represent an articulation thereof, are to be disciplined by public sources of authority, and in particular by the general Code of Conduct in addition to the codes of conduct "of each individual administration" (as now provided pursuant to art. 54, d.lgs. n. 165 of 2001). The existence of two different spheres governed by different principles requires liaison mechanisms by means of which public rules can come to bear on the privatised area of disciplinary responsibility. The model evinced is therefore a definition of duties, delegated in particular to the Code of Conduct (meaning a source that is public in nature and unilateral), which may, though the linkage provided by contract, set itself up as prius in relation to the privatised area of sanctions. While clearly a private stamp was intended to be given to the matter of discipline wherever referred to the dimension involving the "correct execution by the job performer", it nonetheless derives therefrom that the codes - assigned the "political" dimension of providing direction - will not be the sole appointed place delegated to define obligations that strictly pertain to the simple matter of job performance. For this reason, there are other tools available to a public administration, and in particular at the disposal of a director who, acting with the powers of a private employer, will be able to adopt as his own the "regulations for private enterprise" as provided under the Italian Civil Code. 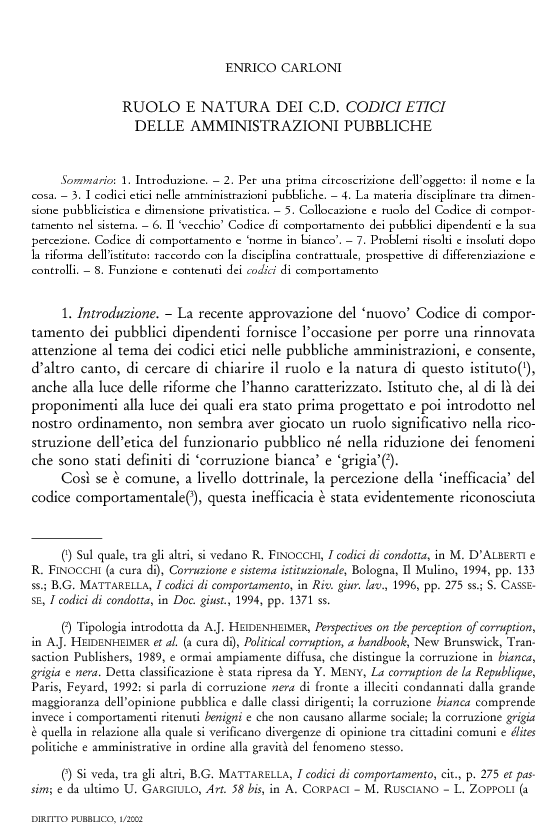