The author examines, within the framework of the reform contained in Title V of the Constitution, the "matter" of the safeguarding of competition. In particular, he observes that the "matters" indicated pursuant to the new Art. 117 of the Constitution as an object of legislative power (exclusive or concurrent and of the State or of the Regions) are not always "subject matters" in a strict sense, which is to say material areas for intervention. In certain cases activity is involved (immigration, education); in other cases, things (properties, munitions and explosives, cultural assets, environmental assets); in others, public ends (defence, State security, public order and public safety); in others, bureaucracies and in general bodies having legal status (the armed forces, State organs, the system and administrative organisation of the State and national public institutions); in others, method of discipline (the civil and penal system); in others, relations between the State and, respectively, the Region and other institutions or groups (with other States, with the European Union, with religious faiths); and in yet others, juridical institutions (citizenship, register of births, deaths and marriages, the register office, etc.). Corresponding to each of these categories is a criterion for classification coinciding with the activity, with the end, with the method of discipline, etc., so that the "matters" indicated in the second and third paragraph can be classified according to a plurality of criteria. When this occurs the categories are not mutually exclusive; instead, they are devoid of the nature that is proper to the categories resulting from the application of a sole criterion of classification. In the author's view it is just the exclusive competence of the State, when defined in relation to certain ends to further (or values to safeguard) that will tend to overflow State confines to invade provinces assigned to the Regions (under the heading of concurrent or even exclusive legislative competence). Such is the case, among others, with the "safeguarding of competition," reserved to the exclusive legislative power of the State. As far as the author is concerned, the safeguarding of competition is not an activity in a strict sense (the activity performed - commercial, industrial, related to the professions - is conceptually distinct from the competition among those who perform it); it is not a thing; it is not a bureaucracy; it does not refer to a relationship between systems and social groups; it is not even a method of discipline. Competition is a relationship involving a plurality of subjects; the safeguarding of competition is essentially a public end, the end of conserving or promoting such relationship, concerning which the author analyses the possible field of application of an end that acts as a limit on regional legislative power (whether concurrent or exclusive), even if this function as a limit is not expressly indicated. And it is a limit destined to operate in the regards of a plurality of matters of concurrent regional competence in a way other than as a limit - something which is indeed expressly established - posed by the fundamental principles of the matter whose determination is reserved to State legislation. 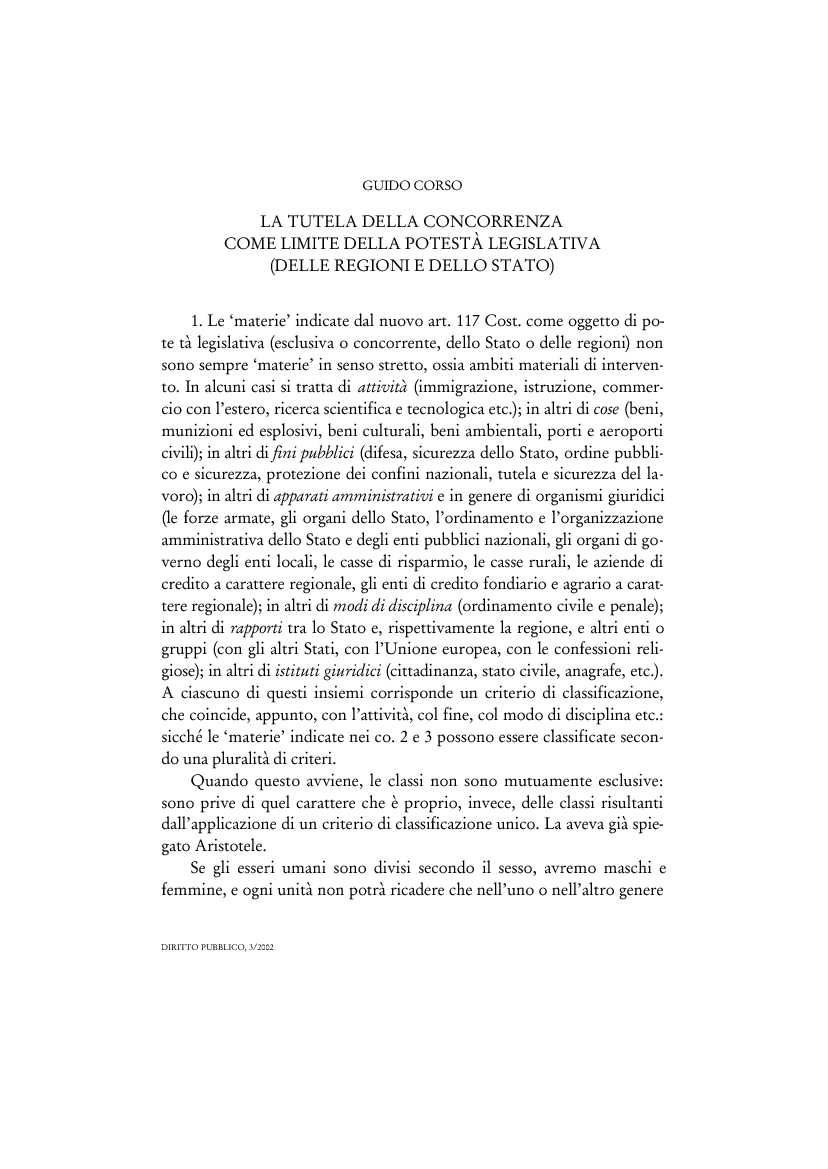