'Human rights is the idea of our time', Louis Henkin perceptively contended, and not only because, as he observed, it is 'the only political-moral idea that has received universal acceptance,' but because rights-based arguments are capable of an exceptional penetrating power in public debates and the political arena. Indeed in our days 'it is usually not long before a problem is expressed as a human rights issue'. Rights talk does fulfil an essential practical function in politics, when movements need to attract emphasis and support on the issues they claim as morally or materially necessary: if a new claim presents itself in the shape of a 'right', it naturally derives a certain touch of nobility from the ideal aspiration it supposedly aims to foster, favoring the demand of that particular prerogative in search of legal recognition. The difference in essence between a particular aspiration or desire, fiercely and tenaciously sustained and proclaimed, and a right is sometimes just a matter of nuances: after all, if we know that not every 'right' can be straight considered a right, it is as much certain that there is no way to exclude that a 'right' is potentially a right. But, if telling what this difference consists of is far from having reached an ultimate definition, I am suggesting that there are in fact times when we cannot free 'rights' from the grip of the scare quotes and I have elaborated three objections to arguments that seem to make this difference negligible: a) the minimalist objection, rebutting the idea that there cannot be anything else but an immediate, simple acquiescence on the moral premises of a 'right'. Indeed, this argument implies that a 'right' cannot but attract the moral agreement or acceptation of people. b) The progress objection, refuting the premise that granting a new right is always eo ipso a new step towards progression. c) The justice objection, contesting the assumption that acknowledging a right would unquestionably reinforce justice inside that given society, implying that more 'rights' bring necessarily more justice for everybody. 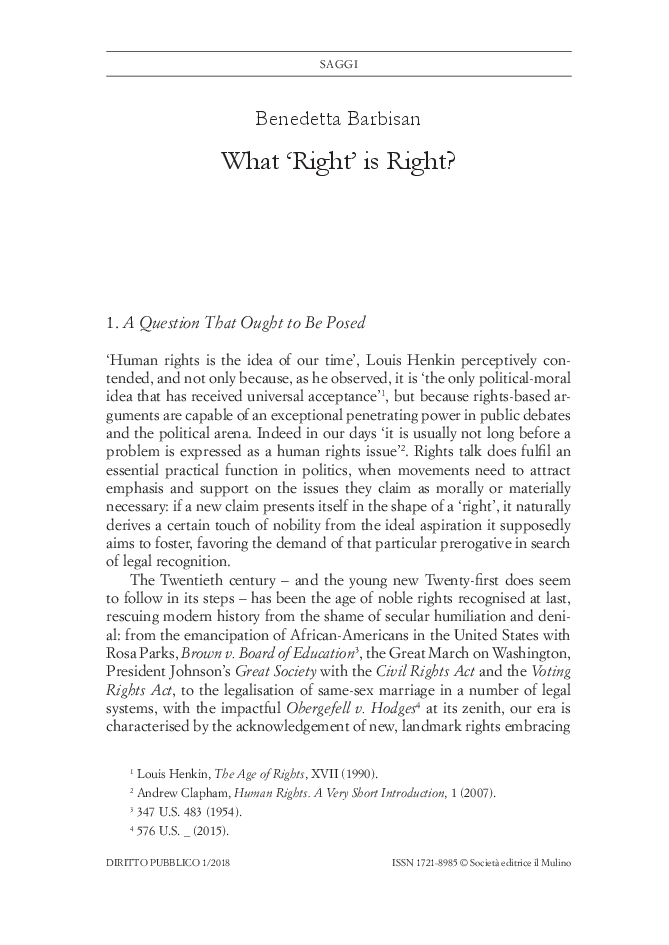