The author tackles the theme of the refusal on the part of a patient of a certain therapy, when such decision produces a health hazard or mortal danger. Cases of this type pose a dramatic dilemma. For the most part, respect for the will of the patient will be experienced by the physician as a sort of "facilitation" of self-destructive behaviour intrinsically contradictory with respect to the original sense of the medical profession. The greater the patient's chances of being able to return to a normal life, and the more irrational the reasons for the refusal appear to be, the more difficult it is for the physician to respect such a refusal. On the other hand, health care imposed by force, however conceived and carried out, evidently will assume the characteristics of a violent act particularly humiliating not just because aimed at the "body" of the patient, but above all because bound to downgrade the most deeply-rooted convictions of the interested party: the patient's conception of life and death; ethical, philosophical and religious convictions; and the right to stand as the only "true" arbiter regarding his or her most intimate interests. In actual fact, the responsibility for the handling of such problematic matters falls entirely to the physician. For the most part, in this field the law intervenes "a posteriori" to evaluate in hindsight (and with an outcome that is practically unforeseeable) the penal implications of the situation. Nevertheless, at the time when a practical decision is imperative the physician might look in vain for guidance in legal theory and practice, which up to now have proved capable only of providing a highly contradictory gamut of solutions: the normative system, and the subjects who ought to constitute the spokesmen of this system, seem to wash their hands of their proper role of providing "preventive" guidance for human action. In his reconstruction of the various positions, the author shows how jurisprudence oscillates between the extremes of the identification of compulsory "atypical" measures useful to the physician in fulfilling his duty to safeguard health even "contra voluntatem", and the recognition of an absolute and pre-eminent significance to the refusal of medical care, even when such cannot be confirmed owing to the patient's state of unconsciousness. The author finds a similar variety of views in doctrine. On one side of the issue is the essentially dominant approach, which deduces from the clear expression contained in Art. 32, Par. 2 of the Constitution the impossibility of any forcible imposition of medical treatment; and, in opposition, various strict interpretations linked to the dogma that life is not to be freely disposed of. Undoubtedly, to some extent this disparity of viewpoints is only normal in reference to such a complex emotional issue. What legal theory can nevertheless be reproached for is its frequent indulgence in considerations which may be of notable cultural significance, but which risk being misleading in the context of argumentation that aspires to be perfectly juridical. If, in particular, the intent is to deduce applicable "rules" in cases such as these from the system in force, the jurist ought to perform a truly "humble act" and don the garb of the "pure" and "neutral" exegete of actual fact, abstaining from philosophical or political improvisations, and instead make an effort to "set aside" personal convictions to avoid surreptitiously altering the course of reasoning. 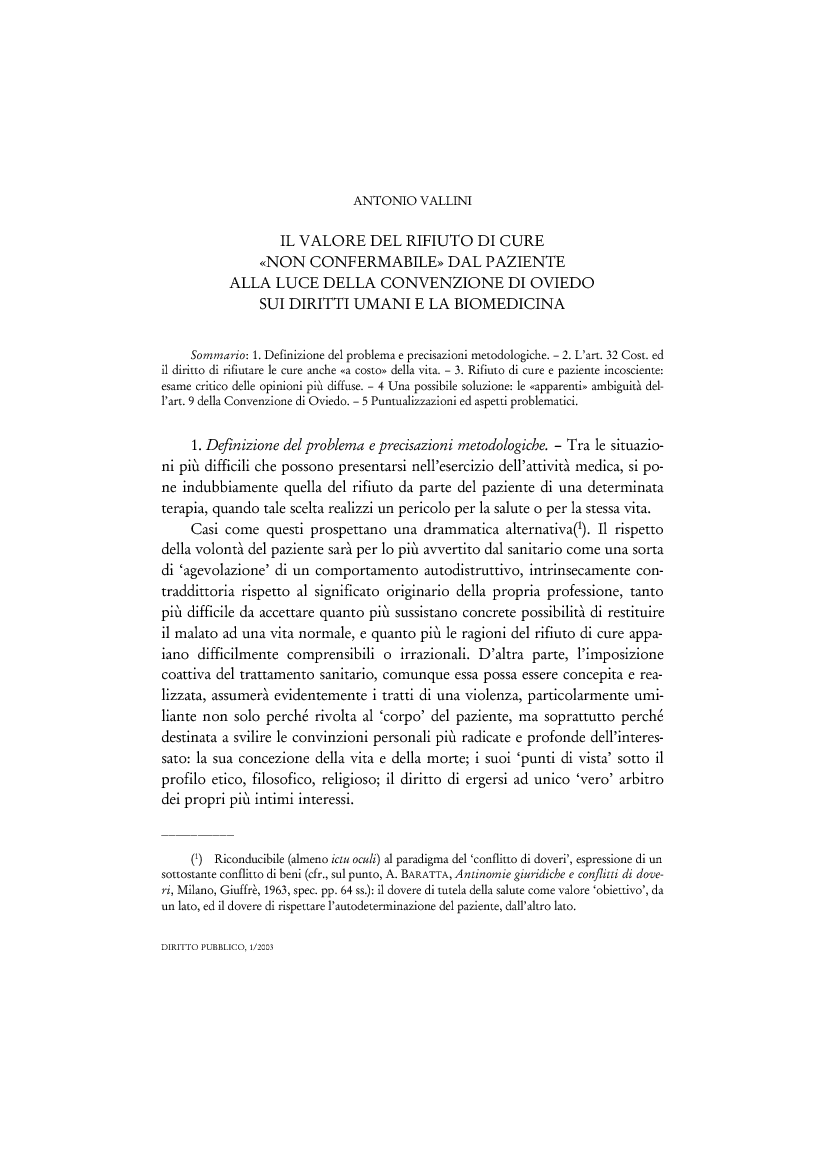