The work concerns itself with the proposal contained in several recent bills before Parliament to introduce in the Italian legal system the principle that the public administrations shall normally operate under private law except when the law states otherwise. At the outset observations are made concerning the phenomenon of privatisation, above all to make it clear that the work concerns only the relationship between activity aimed at pursuing public interests (function) and the instruments of public law - in other words, specific areas where the presence of the public administration is not itself an issue. The author then proceeds to analyse the three most significant texts that include the principle of the ordinary use of private law in matters pertaining to the public administration: 1) the text approved in 1997 by the so-called Commissione Bicamerale or the Joint Commission of the Chamber of Deputies and Senate; 2) the text approved during the past legislature (XIII) by the Chamber of Deputies; 3) the text approved on April 10, 2003 by the Senate. In the author's view, above and beyond their apparent similarity the different overall context in which the texts were created, as well as certain literal textual differences contained in them, make the real significance of each substantially unlike the others. The particular aim of this analysis is to establish if and when it would be possible to speak of the effective privatisation of administrative action, which is to say behaviour on the part of the public administration completely assimilable to that of a private person, without any procedural restrictions. According to the author, only the bill introduced in 2000 (XIII Legislature) overtly aimed at such an outcome, whereas the text recently approved by the Senate (as well as the original proposal contained in the «Bicamerale» project for constitutional reform) continues to consider the public admini-stration's activity as functional, regardless of whether the instrument used is private or public. The second part of the work is devoted to certain implications deriving from this initial finding. First discussed here is the matter of the constitutional regime (statute) for public administration activity, beginning with the general theoretical assumption that administrative activity is perceptible as an entity in and of itself no less distinct from legal acts as from the notion of private autonomy. The author goes so far as to declare that administrative activity enjoys constitutional status. The second issue discussed is the problem of the compatibility of the regime functional to administrative activity and the use of private law instruments. The author rejects the typical dualistic authoritative measure/plus bargaining scheme and maintains that the administrative act itself directly attending to public interests is an act of consent to bargaining, without entailing a change in the private nature of the bargaining itself. The third and final question discussed is the matter of the relationship between unforeseen events that bear on the public interest crystallised in a private law act and the fixed nature of the latter. The topic is approached from the standpoint of civil law involving presupposition rather than of public law involving self-protection. 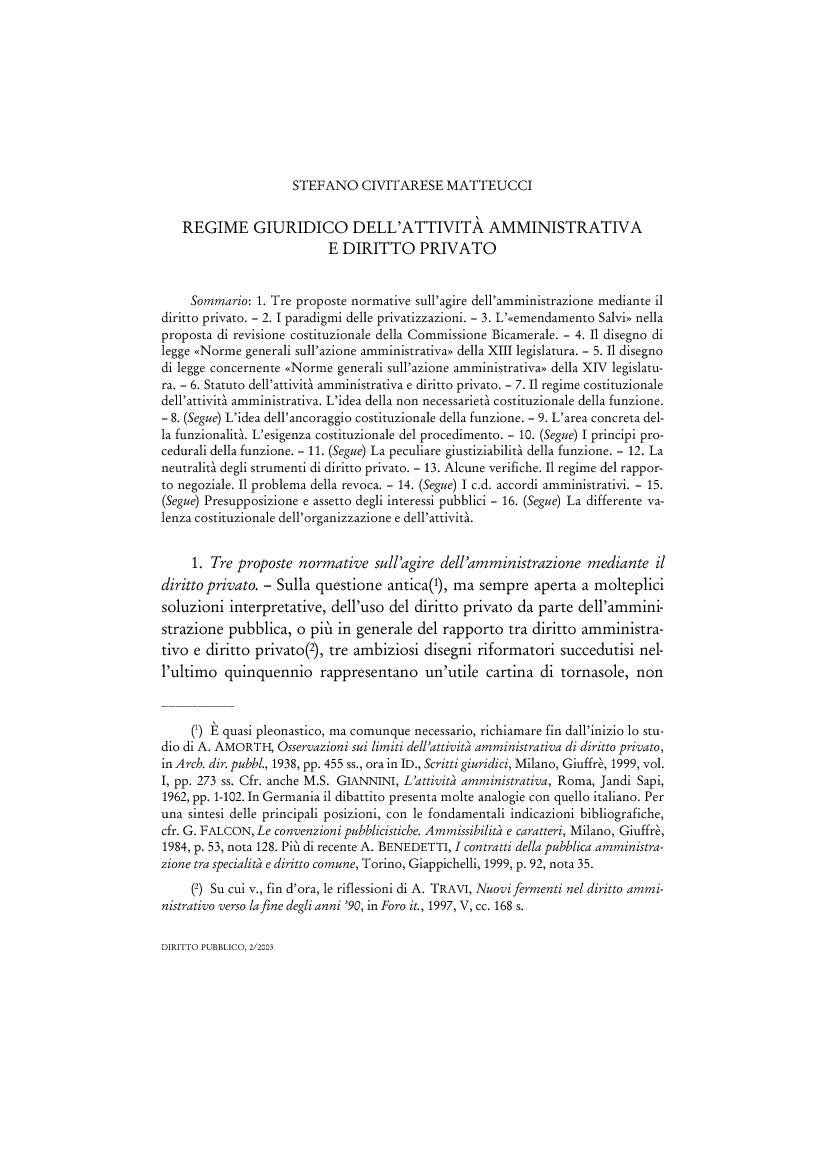