The author examines the common features of protection against public and private power along with the problematic aspects common to each. The attempt to use a common viewpoint to frame the principle problems connected with the protection against public and private power makes it possible to bring out their characteristic profiles with an objective datum as a starting point, only later moving on to the matter of conceptual definitions. This particular perspective makes it possible to provide useful elements for evaluating whether in substance we are before a phenomenon (juridical power) that leads back to the same set of rules (albeit with inevitable special features present, as is likewise the case with private powers), or if instead we are dealing with two radically different phenomena. If the latter is true, is such diversity caused by a trait that is objective or subjective? The author's intent here is not to answer the questions raised, but rather to provide arguments for a critical comparison. The analysis performed by the author demonstrates that the types of logic used in protection against public authority and private power in part overlap, while the path taken for identifying the limits to power and the actual circumstances where a violation has taken place are similar in both instances. In particular, this perspective evidences the features common to review conducted according to a scheme of excessive power and judgement reached based on general clauses. The most significant indication in this sense regards the foundation of the traditional reconstruction of administrative power as a power characterised by specific internal limits and made functional to the pursuit of the public interest. Functionalisation is not considered to be just an approach to a given end, but as a generic preordainment to a higher interest. Taken in this latter sense, such interest nevertheless does not correspond to a predetermined arrangement among the various interests in play and therefore cannot direct matters toward a specific final outcome. Consequently, the functionalised nature of power does not produce direct consequences on the identification of limits, and therefore on the matter of the power itself being subject to review. This same perspective does not, however, permit us to affirm that the limits of public power and of private powers fully coincide, due to the fact that if in some cases they are analogous, in others the exercise of public power is subject to more incisive limits than is the exercise of private powers. An example of this is the principle of impartiality. The profile of jurisdictional protection in a technical sense instead is a partially different matter. In this area, in fact, even though it is no longer possible to detect any clear distinction between techniques affording protection in the public sphere as opposed to private, still the list of remedies against the exercise of public power tends to be uniform, while that against the private powers shows great variation. However, the crucial point concerning safeguards is something else again, which has not yet found a definitive arrangement: what still remains to be understood is whether the traditional model of protection pivoting on legal challenges within the framework of the administrative trial is also capable of explaining the present system where a clear distinction between protection against public power and protection against private powers is no longer recognisable. 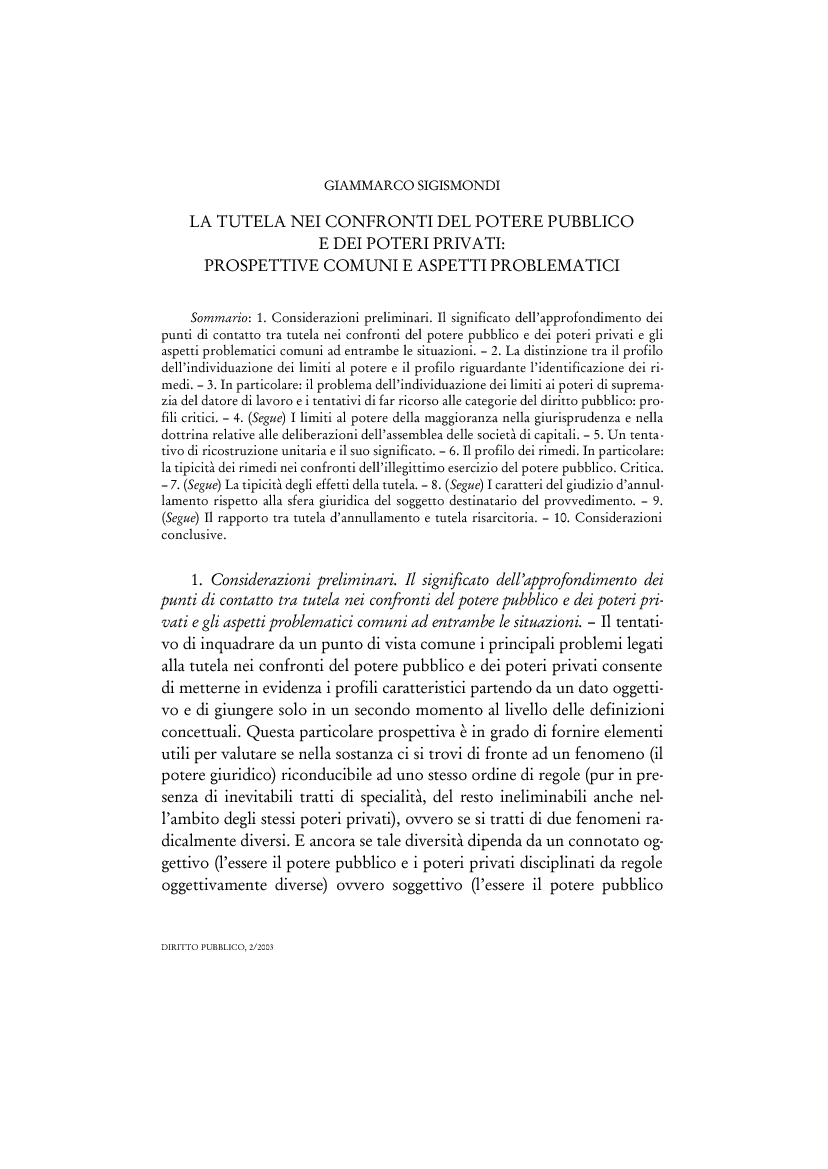