To date, discussions of public health in Islam have been generally unsatisfactory. By surveying texts written in the pre- and early-modern Middle East, North Africa and Muslim Spain between 800 and 1800, this article considers the nature of health and the public and their relation to Islamic law from several perspectives. Graeco-Arabic medicine informed how Muslim authors viewed the relationship between disease, the environment and the human body. Important figures in the Graeco-Arabic medical tradition propounded aetiological paradigms to account for how disease could affect inhabitants of a locality or region. Measures for treatment and prevention of disease were directed towards the individual rather than a population. Islamic jurisprudence emerged in an environment in which medical knowledge and skill were valued. Medicine influenced how Muslim jurists thought about the rôle human wellbeing should play in legal reasoning. A survey of the debate about smoking in the early-modern Ottoman empire illustrates the extent medical science shaped the debate about whether smoking is sanctioned by Islamic law. Health and wellbeing informed how Muslim sovereigns rationalised state policies affecting the Muslim community as a whole, how they enforced Islamic law in public spaces and distributed justice in the law courts. Finally, I examine in what sense Islamic hospitals were public health institutions. Despite the fact that they were generally charitable institutions that provided short- and long-term medical care and medical education, I show how Islamic hospitals from the beginning served the political ideologies and interests of the Muslim rulers who established them 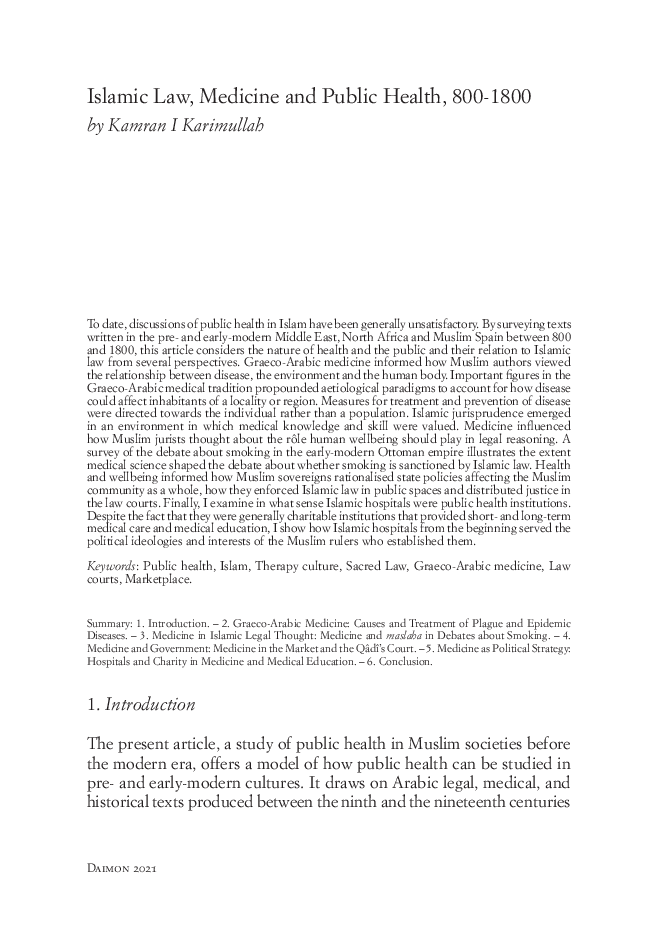