Starting from the observation of the social changes that have affected European society, Grillo and Shah's essay, taking into account the advent of new social identities (as a result of these global phenomena that have seen the arrival of peoples carrying new cultural problems), raises questions in reference to the most useful legal approach and the resulting (possible) investigation of different forms of cohabitation. The decision to regulate the occurrence of different religious freedoms and their coexistence was problematic; this primarily because of frequency of use of the full veil (the «burqa») in public space, with the rise, in several European countries, of legislative proposals to prohibit the use of practical clothing occultating facial features. The debate that ensued showed how the burqa ban would be likely to cause serious interferences with the exercise of at least three fundamental rights: the freedom of religion, since it includes in itself the right to manifest one's religion and, therefore, even through clothing, to express everyone's religious identity; the freedom of opinion and, therefore, the freedom to express everyone's personal beliefs, even about the behavior that the citizens want to adopt in public; the freedom of movement, since a law that bars women to use, while walking the streets, the full veil could be considered a limitation to their mobility. The reflections of the authors, while not denying the basic needs of public policy which would warrant a ban in the European countries, also emphasize the possibility that the measures going to ban the use of the burqa in public may, instead of protecting the women, reinforcing their exclusion from the social circuit. The fundamental question of the writing seems, therefore, to refer to the limits that can be put to individual freedoms in order to justify the restrictive measures (analyzed, in this work, in a comparative European level), which are, inter alia, also compatible with fundamental human rights. 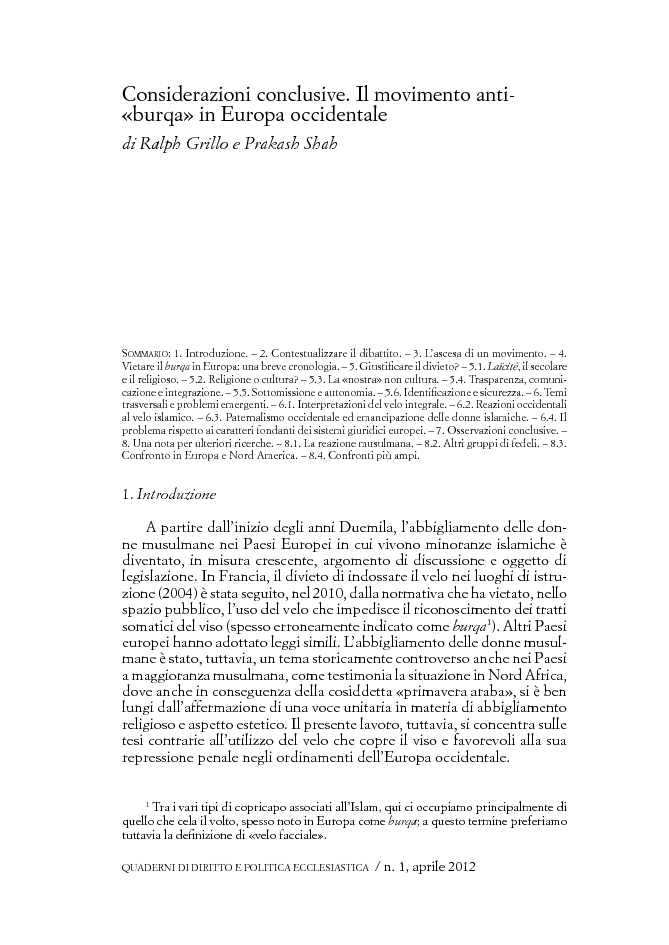