The essay addresses the topic of religious conversion from a spatial point of view. Traditionally, conversion is analyzed as a shift from one universe of faith to another, in which changes in converted people's commitments to communities and social frameworks take place. Conversely, my theoretical attempt is to consider conversion as a proactive crossing of both spiritual and practical borders. The nub of this approach relies upon the existence of a continuum, namely a chorological dimension, between the spiritual borders of faith universes and their pragmatic and spatial projections. They are two faces of the same coin. This is mainly because any conversion needs to be authenticated. A comparative analysis shows that this authentication can take shape only in and across the space of experience. Making visible and certified one's own change of faith is a commitment requested by all faiths through the provision of specific legal stipulations or orthopraxis. But the meaning of such templates of conduct changes, in turn, according to the different universes of belief and social relationship that this conversion traverses. Spiritual and experiential borders transmute, therefore, at the same time that they are crossed. Conversion becomes, in this way, an act of creative trans-lation between different spaces of sense and experience because its proactivity remolds, dialectically and simultaneously, the meanings of both the beliefs and the social worlds it puts in relationship. The denominational rituals of conversion and its practical projections in the secular dimension are to be analyzed as intermingled features of an overall phenomenon. Moreover, the cartography of the spatial implications of conversion should be drawn by looking at the world of communicative connection in which and through which the converted construe the sense of their past and new belonging. In other words, the space of conversion's experience is not coextensive with geographical and political spaces. Further, faiths have learned to imagine themselves and their worldly projections as trans-local and worldwide long before today's globalization. Words such as «Umma» or «Oikoumene» perfectly embody these features of religious experience. So, when an individual enters a new faith, he partakes in new spaces of experience and meaning that forge themselves reciprocally. This implies that conversion is inherently a global phenomenon and, above all, that it is impossible to understand spaces of conversion as unrelated to an inter-religious examination of the trans-local spaces of secularization that history has bequeathed to us. 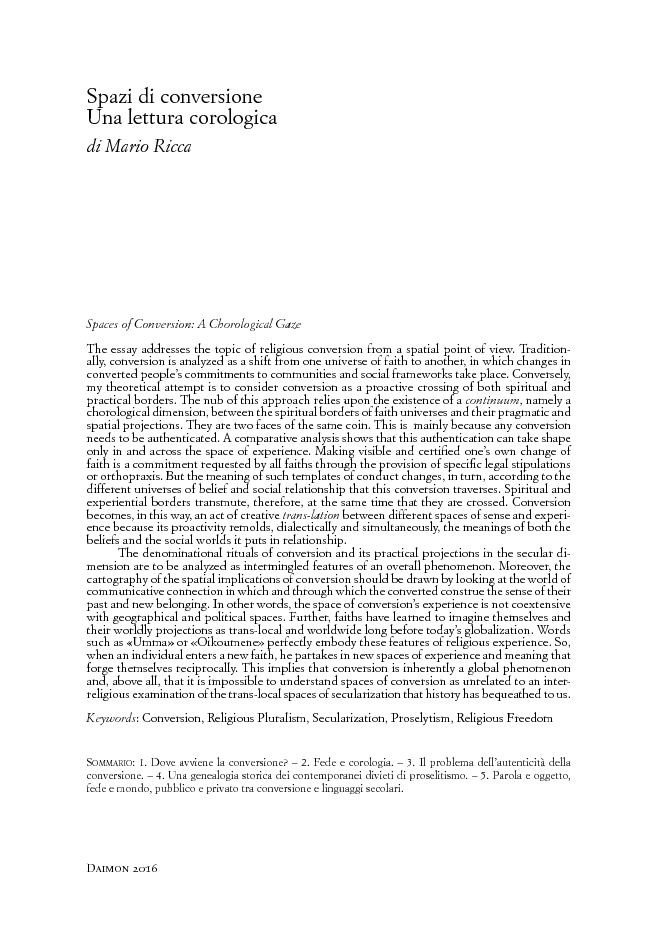