The essays aims at analysing the most recent European regulatory intervention on the immigrations field. After tracing the related European competences (Title V of the Tfeu titled Freedom, Security and Justice), the author focuses on researching the complete framework of references to the topic in a perspective of an increased social solidarity for non-EU citizens who move to the Union. On the one hand, the Title X of the Tfeu (Social policy) appears as a "recessive", failing title, because of the substantial disregard of the subject. On the other hand, the treatment of anti-discrimination law, which originated art. 19 Tfeu (ex Article 13 TCE), in a context of judicial appreciation of the value of human dignity seems to be more interesting, at least potentially. The purpose of this essay is to give importance not only to the classic balance of economic values with those in the EU law social dimension. As recent movement of people from the Maghreb have shown, there is a different fundamental trade-off in the construction of the European social model: that is the one between social and security issues of European citizens, whose balance, despite the Lisbon Treaty, is too centred on member states and their national rules. The result is completely inadequate to current socioeconomic and political deal. 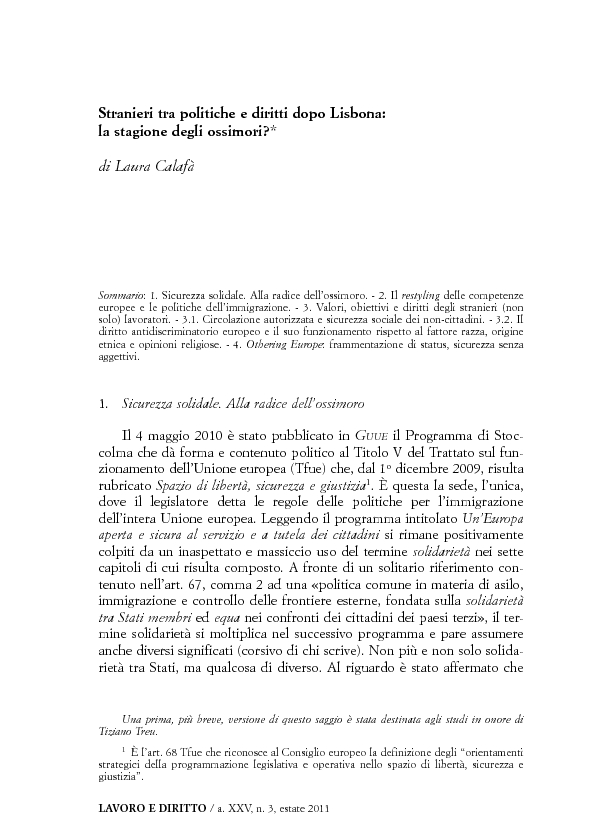