The essay aims at piecing together the fragments of the national le- gal system that can be traced back to psychosocial risks, which is a topic that is not directly dealt with by the legislator and that requires a con- stant confrontation with disciplines other than law. The analysis moves from the interpretation of Article 28 of the Italian H&S Act. It focuses on its reference to work-related stress, mentioned within the list of risks to be assessed, and specifically it reconstructs two different interpretative perspectives - synthesised in the expressions «one reads stress, yet thinks of it as mobbing» and «one reads stress, yet thinks of it as psycho- social risk» - also through an analysis of the case-law on the subject. In this perspective, the Author investigates on the concept of organisational wellbeing - as recently regulated by the legislator as far as the public sector is concerned - and the role of collective bargaining on this topic. In her conclusions, she suggests a reversal from genus to species with regard to the topic of Psrs, also through a valorisation of the notion of «organisational constraint» as set by the Inail regulative letter, invalidated by the Administrative Supreme Court (Consiglio di Stato). 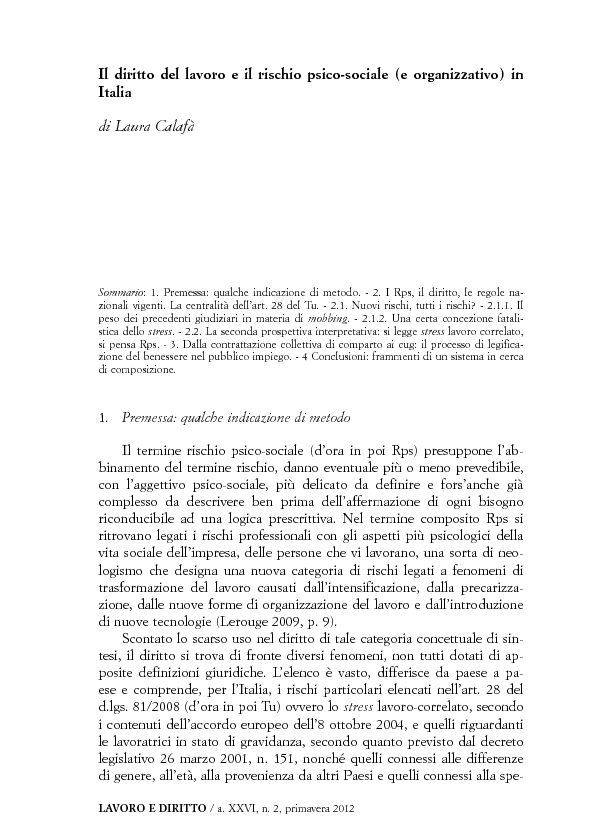