This article analyses the system of relationships between the "Istituto per la ricostruzione industriale" (Iri) - a public institution created in 1933 to manage the finances of the State following the economic crisis - the government, the traditional ministerial offices, and the Fascist National Party (Pnf). The problem of the autonomy of the institution from the political system, at the moment when the totalitarian goals of fascism were gaining momentum, is at the centre of this study, which goes beyond the analysis of formal relationships defined by legislation and rules, so as to focus on the administrative procedure and the informal relationships that are established between different individuals. On the one hand, a picture emerges of the capability of the Iri management to carve out for itself, from the start, an important sphere of autonomy from the ministerial offices on which it officially depended - the Ministry of Finance and Ministry of Corporations; it succeeded in determining its own administrative goals thanks to the increased prestige it enjoyed and the personal relationships that linked the President of the Iri, Beneduce, to the head of government, Benito Mussolini and to the Ministry of Finance. On the other hand, though, the role of the head of government is shown to be at the very centre of relationships between the institution and the political system, thanks to the strong centralisation of power. The personal and informal relationships between the management of the Iri and the top of the political administration (Mussolini and Jung) are key in explaining the balance of power between the institution and political system. The relationship with the Pnf seemed to evolve over the course of time, in relation to the party's changing direction: the management of the body, which continued to be made up of individuals that came from outside the fascist party, succeeded in adapting to the progressive totalitarian grip of the party. The party was also involved in the system of institutions, allowing the Pnf to have a greater influence on the process of designating roles within the controlled firms, whilst also maintaining the goals of the firm's activity and the choice of its direction. Not even the transformation of the Iri into a permanent institution in 1937, which placed it formally under the management of the corporations, could undermine its autonomy, even though a tighter link with the government was imposed, led by the authorities, mediating between the corporations and the cutbacks devised by the institution. The penetration of fascism in the organs of the entity seemed to be realised between 1943 and 1945, under the Italian Social Republic, with the involvement of Iri companies in the war effort and in the affirmation of an economy regulated by the State, for which the new public entity that was created in 1944, Igefi, ought to have been fundamental. The prospective of a 'planned' economy was attractive to some in the Iri, who desired the growth of the body's role in the structure of the regime. The fear of ever tighter political control, however, which would compromise the 'Beneduce' model by creating an autonomous firm run in line with the private sector, led the company's bureaucrats to oppose the strident resistance to the projects of the fascist Republic government, to the point that it prevented their effective implementation. 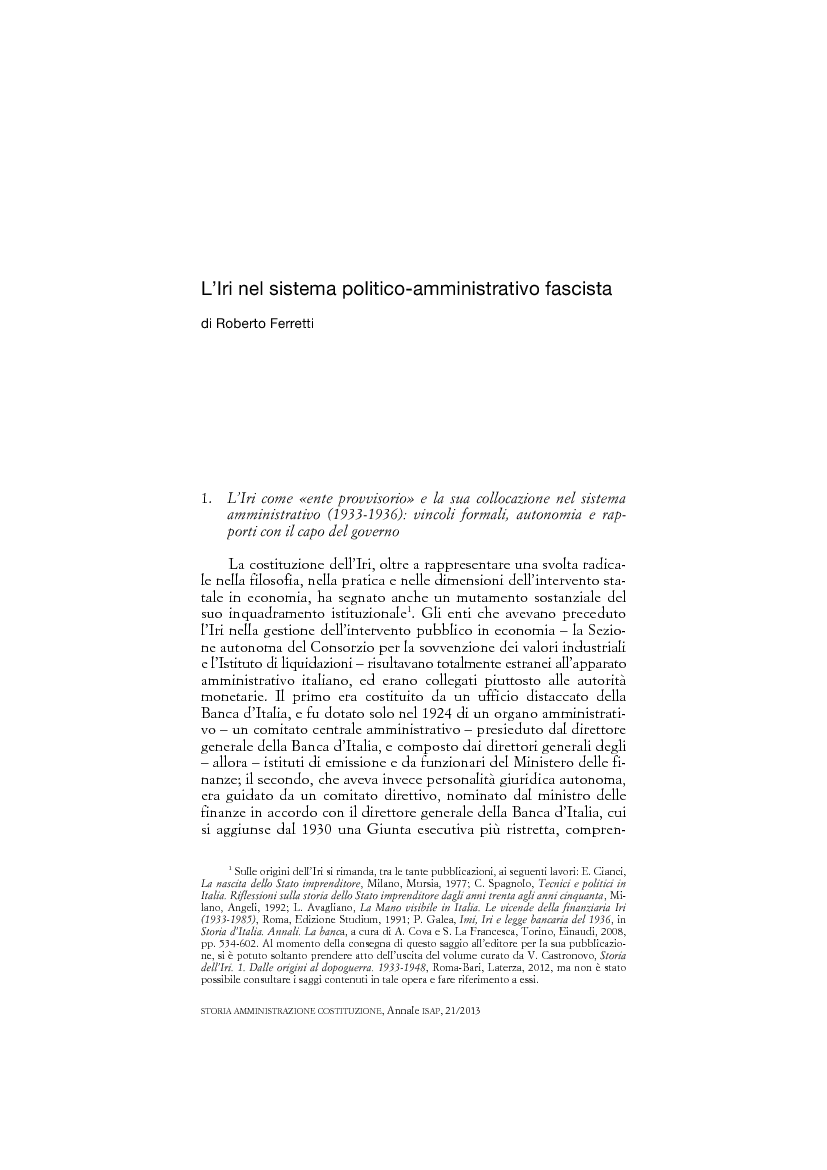