The whole set of rules from 1865, concerning the Public Security (Law no. 2248, March the 20th, Allegato B) - not very unlike the former law of the Regno di Sardegna, 1859 - was current until 1888. It formed the basis for a Public Order policy pretty authoritarian, characterized by a wide discretionary margin left to Prefects. The Public Security Law was at first investigated by jurists during the decade 1960-1970. It was the product of a rather hard balance between the need to prevent crimes, and the other need not to limit those liberties, for the citizens, which had been fixed in the 1848 Statute. Nevertheless, as a matter of fact, it was aimed to defend nothing else but the bourgeoisie's interests: it contained several regulations which considered the marginal classes (such as beggars, unemployed, vagrants) as a potential threat for the whole society. It consequently delegated to the Police, and not to the Magistracy, the practical application of all those preventive measures, in order to leave "formally" intact the legality principle. A first signal there was a needing for a change can be traced within the last years of the nineteenth century's Seventies. A more serious and actual danger emerged, namely those (political) opponents (mostly internationalists and anarchists and, later on, socialists too). Their aim was to subvert the constituted authority, their means were attempts on sovereigns' and men-of-power's lives. From then on, a new Public Security policy was set out, more focused on organizational-technical features, which gave birth to a more modern and effective police force and to new investigatory techniques - these fully developing around the turn of the century by the Forensic School. Governments dedicated, specially from 1880 on, a particular attention to the quality of the police guards: a set of rules was targeted to a more accurate recruitment and better professional training, and at the same time to increase the number of guards. On this matter, and also on the necessity to consider the ensemble of the different bodies of Public Security (Carabineers, Financial Police, Civic Guards), is nowadays starting a new, promising line of research about those Corps' history, based on sociological studies widespread within the Anglo-Saxon world. Generally speaking, only in recent times historiography - previously focused mainly on the use - by "liberal" 19th century's Governments - of exceptional laws and measures (such as the "stato d'assedio") - has begun to deepen different viewpoints concerning the actual functioning of this apparatus, and of Public Security officials who were responsible for this, also by examining, in details, the archives of prefectures and police headquarters. 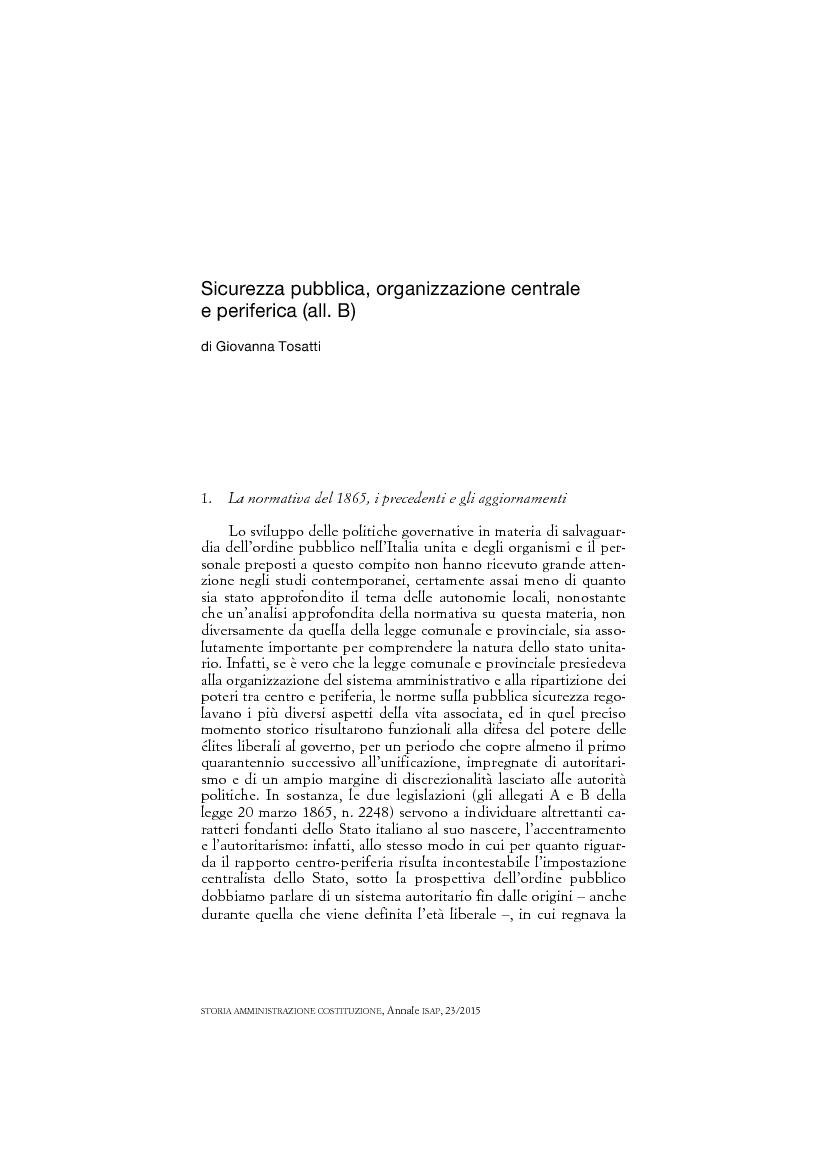