The essay carries out a critical reconstruction of the emergency powers activated to deal with the COVID-19 emergency. On the one hand, it intends to highlight the loss of centrality of Parliament and, on the other, the limits of competitive regionalism. In the first part, the essay tries to verify whether the special system of emergency powers activated in this circumstance is legitimate, considering its derogation from the general discipline dictated by the civil protection law. The essay tries to verify, then, if the instruments adopted are compatible with the Italian form of government or if they do not end up further compromising the centrality of the Parliament, which was already greatly reduced during the past decades. In particular, the essay analyzes the problems posed by the much-discussed decrees of the President of the Council of Ministers (d.P.C.M.), also considering their substantial overcoming in the last year and a recent judgement by the Constitutional Court. In this context, the essay questions what should be the spaces for ordinary legislation, in view of the overcoming of the pandemic emergency phase. Finally, the essay tries to verify whether the simultaneous state and regional interventions concerning the management of the pandemic, which in many cases overlap, has once again highlighted the limits of competitive regionalism, and whether it is not necessary to imagine a new discipline of relations between State and Regions 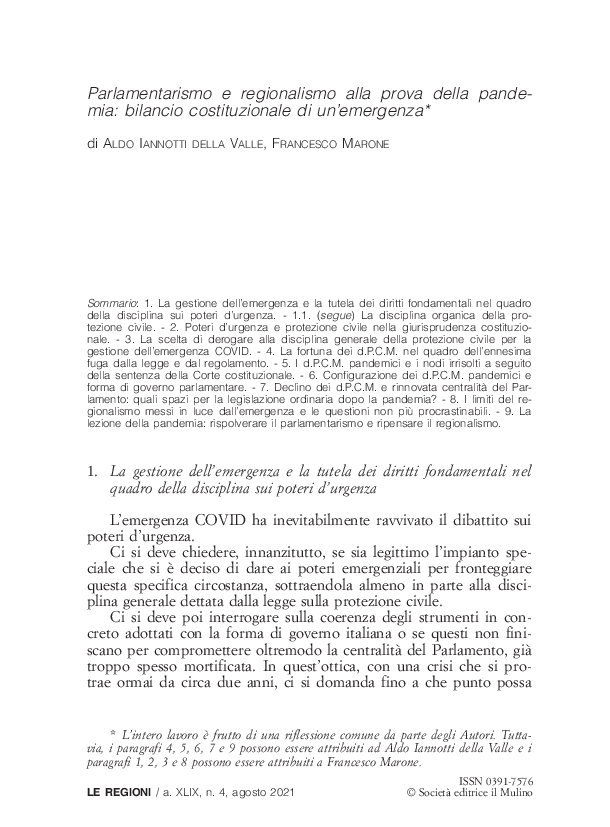