The work examines the issues of reception and integration of asylum seekers and refugees, considering how the management of widespread hospitality, especially in Calabrian areas characterized by strong depopulation and social-economic depression, can be an opportunity for growth and enhancement of the territorial peculiarities. The implementation of pathways of social and economic inclusion could be a resource to promote local development and employment, with the use of local populations in skilled work positions, in the hospitality circuit, and could be a way to combat the chronic demographic crisis and depopulation of many areas. In the light of subsidiarity, it is examined how the implementation of widespread hospitality requires synergistic action and constant collaboration of local authorities at the various levels, and of those involved in the Third Sector, Volunteering and Social Private, in order to respect the peculiarities of the territory and promote real integration and social cohesion. The Calabrian experience, in some small centres, has brought forward virtuous pioneering examples of the reception of refugees and asylum seekers, later included in the integrated national SPRAR network. It is also considered that, after a period of slowdown, due to the chronic Calabrian economic fragility and to the discontinuity of political interventions, the new European Operational Programs and the last threeyear Regional Plan for the reception and integration of migrants, adopted in June 2019 and planned by l.r. 18/2009 could give a new impetus to the projects of reception and integration in the territory, enhancing the most virtuous examples and seeking solutions to the most complex situations. The Plan also aims to protect people who, with the application of Law No. 132/2018, are placed outside the SPRARS, because they lack the most restrictive requirements for access to the new System (SIPROIMI). 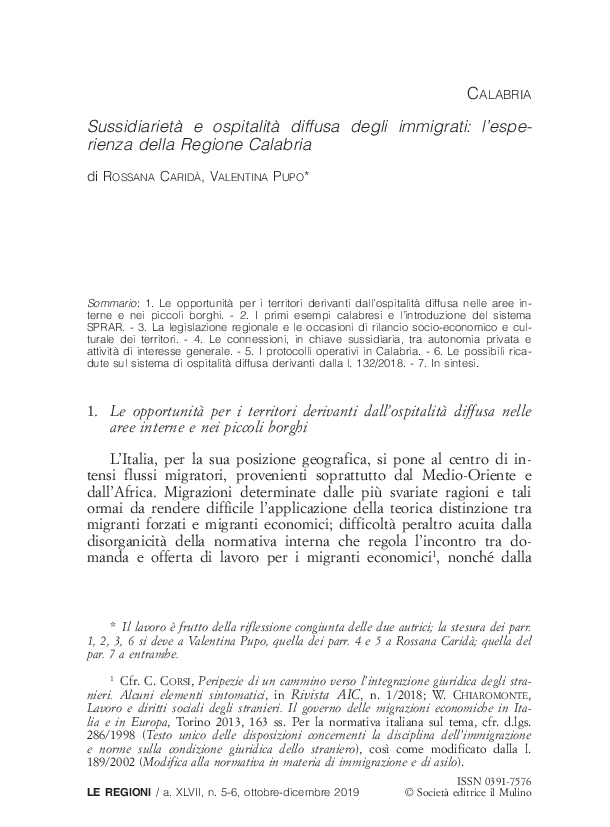