The infant-parent interaction is one of the basic aspects of early relationship and constitutes the main experience of behavioural, affective and emotional exchange in the first year of life: these early characteristics of the co-construction of the infant's relational competences are the focus of interest in the research on early interactive-relational models in the triadic perspective. This approach considers the mother-father-child interaction as the matrix of early competences, which start to develop well before delivery, that is, already during pregnancy (Fivaz-Depeursinge, 2006): in this phase, parents-to-be act several behaviours that are considered as forerunners of their care-giving abilities and of their interaction with the child. This theoretical approach has generated a specific and peculiar observation paradigm of triadic interactive competences during pregnancy, the Lausanne Trilogue Play (LTP; Fivaz-Depeursinge and Corboz-Warnery, 1999). In line with these ideas, the aim of the study was to investigate: a) the psychometric characteristics of the administration and coding of the pre-natal and post-natal LTP procedure in the Italian culture and their comparison with the Lausanne validation studies; b) the characteristics of triadic interactions during pregnancy. Method: 98 non-referred primiparous families were recruited at child-birth courses of two Italian hospitals. In addition to validated questionnaires, observational data were collected at the 7th months of pregnancy in the prenatal LTP. Results: Aim 1: The collected data show good reliability of the LTP coding (a = .73) and a consistent factorial structure (KMO = .79; Bartlett test c2 (N = 70, 10)= 104.09, p < .001) in line with the Lausanne validation studies (Carneiro et al., 2006; Favez et al., 2006). (The Italian group shows a specific distribution in the «Structure of the Play» Scale, with a time mean of 7.13, which is higher than the value reported in the coding system.) Aim 2: The «Structure of the Play» and the «Intuitive Behaviours» Scales seem the most representative dimensions in the prenatal period. Conclusion: Coparental abilities during pregnancy represent an interactive matrix for the construction of early family relations in the child's first year of life and may be considered as protective factors in the child's development of early triadic interactive abilities. 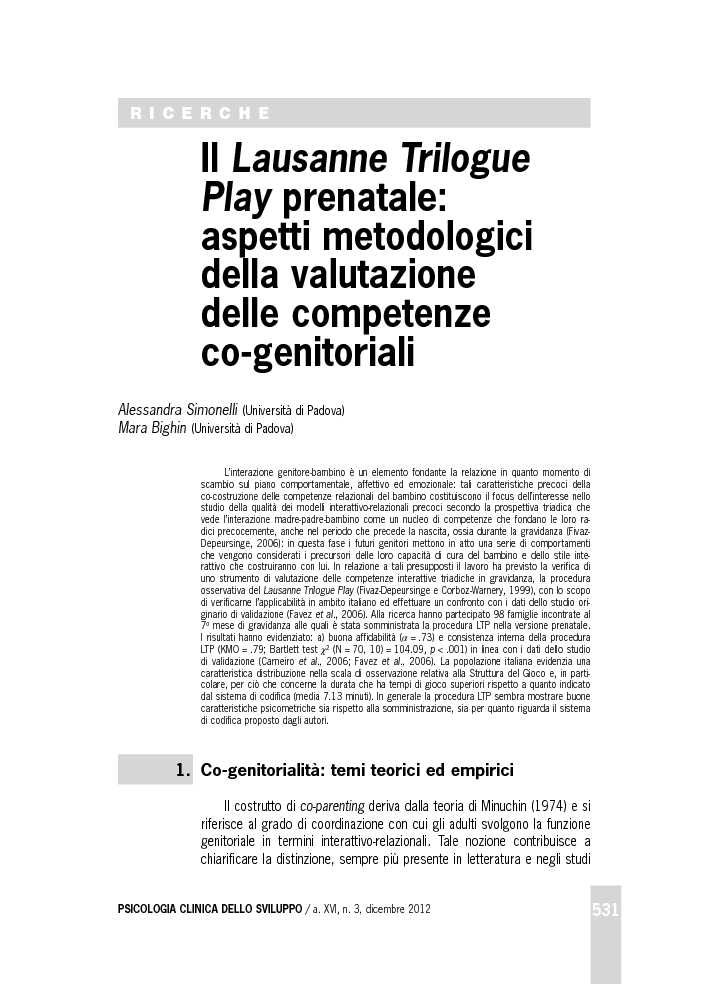