Three are the main aims of the present paper: a) to study the Reflective Function, as defined by Fonagy and coll. (1997), during early adolescence, period in which cognitive and metacognitive abilities develop; b) to investigate the possible correlations between Reflective Function and attachment models during early adolescence, as it has been proved in adulthood; c) to investigate the possible relations between Reflective Function and the dimensions of the Coherence of Mind, Coherence of Transcript, as defined by Grice (1975), and Metacognitive Monitoring, as proposed in the Adult Attachment Interview Coding Manual by Main and Goldwyn (1994). Within this framework, it has been settled a sample composed by 33 subjects (17 males and 16 females) ranging from 12 years to 14, attending the last year of a middle school in Rome. The Intervista sull'Attaccamento in Latenza (Engl. trans.: A.I.C.A. = Attachment Interview for Childhood and Adolescence), age-revised version of the Adult Attachment Interview, has been administered to the subjects; the Interview has been coded by indipendent judges on the basis of the Reflective Scale by Fonagy et al. (1997) and of Main and Goldwyn's coding system scales (1994). Results have shown a good applicability of the Reflective Function Scale in early adolescence and its correlation to the Coherence of Mind, Coherence of Transcript, Metacognitive Monitoring scales and to the Attachment Categories. 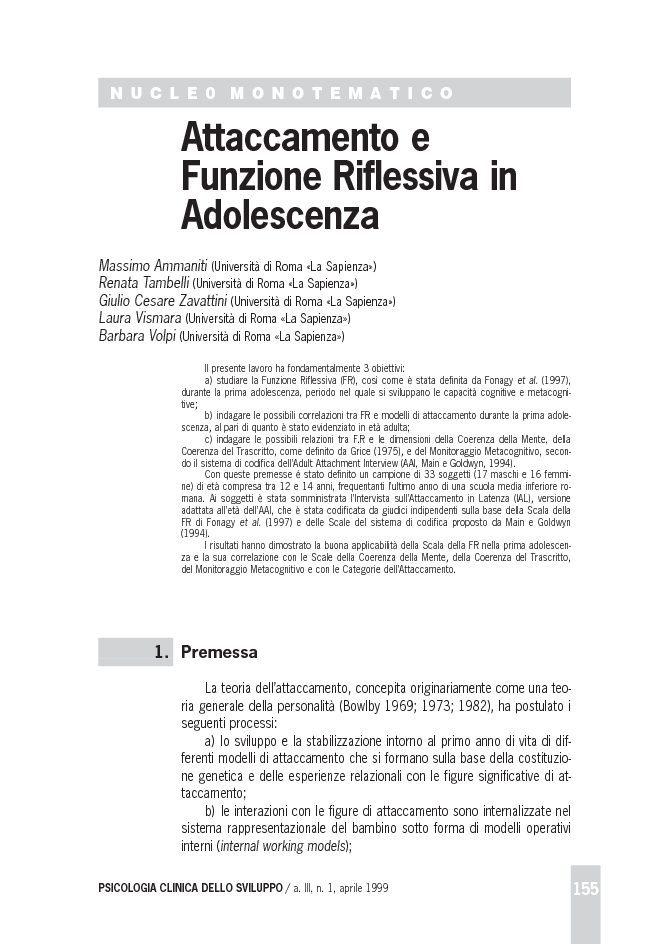