The boundaries of the city of Rome are deeply marked by the dialectic between the sacred dimension and the construction of earthly power. Plural identities and paths that influence the political administrative processes as well as the cultural and symbolic spheres. Rome is the city of the pope inextricably linked to a universal projection, but it is at the same time, especially in the contemporary age, the capital of a state that defines itself within a complex process of nationalization. The space of a capital in the making is to be defined between the sacredness of global aspirations and the terrain of political constructions. A long-term process rooted in the most controversial pages of the relationship between religion and politics, between secular society and religious conditioning, between individual participation and collective identity. Because of the peculiarity of its history and the evolution that has marked the city, from the birth of the Kingdom of Italy to the most recent days, facing the sacredness of Rome means confronting an articulated path, in many respects emblematic and representative of national history. Understanding the city’s identity is therefore not an immediate goal, especially since it cannot be defined unambiguously, being affected by the tensions and changes that have occurred over time. In this contribution, I present some possible interpretive coordinates to reread the identities of a city that was the seat of Christianity and papal temporal power and became the capital of a new kingdom suspended between Europe and the South, between the construction of a continental architecture and the centrality of the Mediterranean Sea 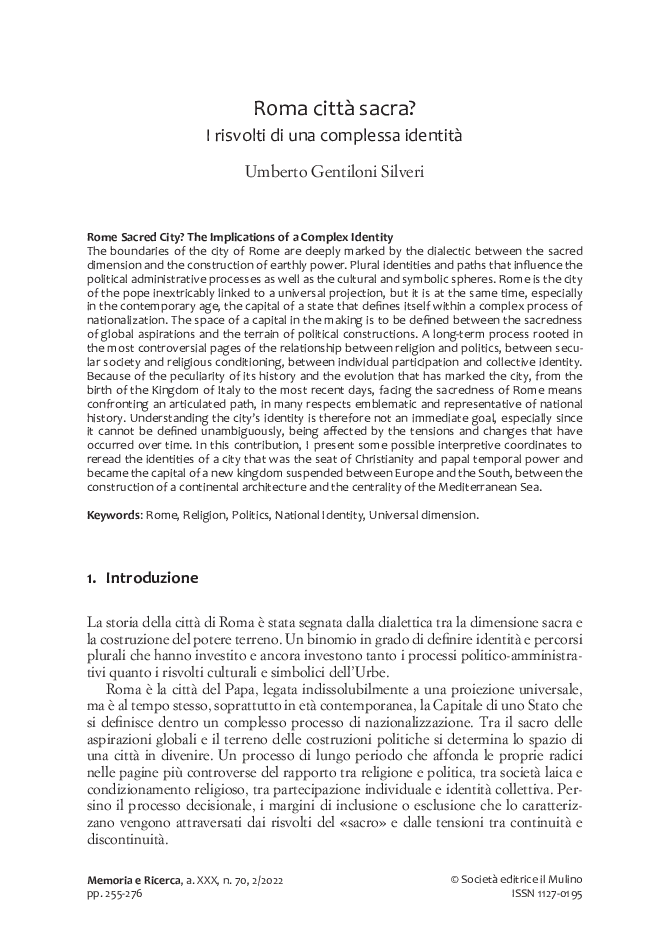