The article deals with the relationship between J. Walter Thompson (JWT), the world leading advertising agency of the time, and Italy in the post-WWII era. Based on the unpublished papers of the agency kept at the Hartman Center, Duke University (Durham, NC), as well as on British and Italian sources, it provides a truly transnational perspective from which to look at the peninsula in the "glorious thirties." The focus is on the daily life of the managers and technicians of the JWT Italian branch, their images of the country, the ones they projected onto the adverts, the circulation of ideas, people, and practices underlying the branch's experience and fuelling the newly emerging world of mass consumption across a network of networks distended between the Atlantic and global markets. The research adds to the ongoing discussion on the American influence on Italy and the world in the post-WWII era. In keeping with the most recent international literature on the topic, it shows how the actual process defies the exceptionalism view according to which cultures moved inexorably along the West-East axis or radiated from the "indispensable nation" to the rest of the world. In its stead, a complex and multi-layered set of cultural and organizational negotiations and hybridizations do emerge. Secondly, the article adds new evidence and interpretive elements to the history of the contrasted construction of a "modern," "western," consumption-led, and U.S.-centered Atlantic imaginery and the way such an imaginery came to incorporate the Italian peninsula. In the process, it suggests ways for further research on how Italy moved, in the American and international imagination, from a seemingly helpless backward-looking country to a cultural trend-setter. 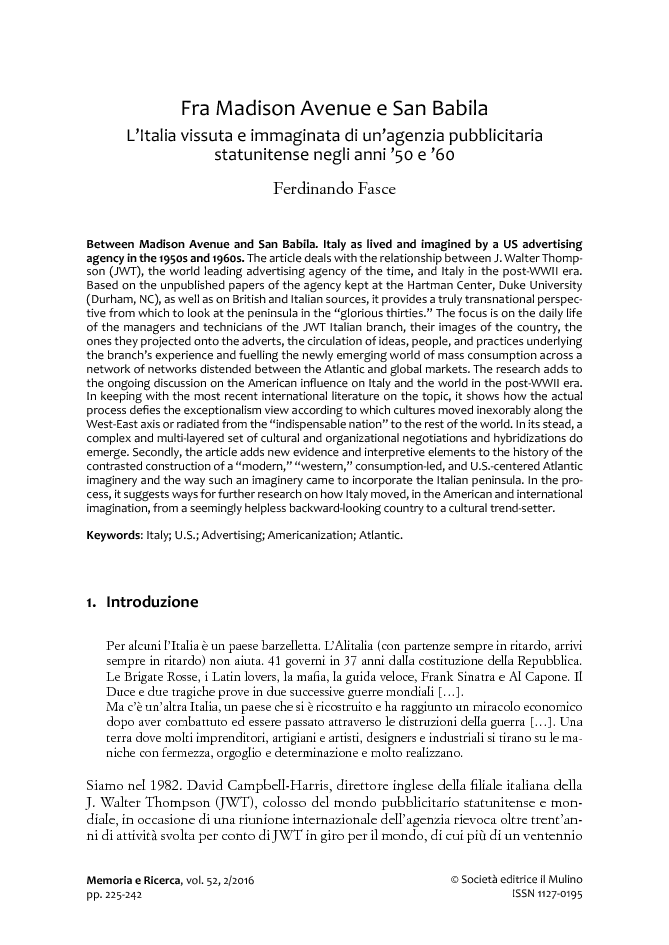