When we look at the Brooklyn Bridge it is difficult to imagine that the gigantic suspension bridge was projected before the Civil War and inaugurated during the Reconstruction. But what stunned the people in particular were two gigantic gothic towers, the building of which cost the life of the self-taught engineer, John Roebling, and a paralysis to his son Washington, who continued the construction after the death of the father. Emily Warren, Washington's wife, was able to bring to the end the project, keeping contacts with her husband and people at the work. In a period when the women were growing up importance in the American society, Emily was not an exception, and the building of the bridge ended in 1883. The essay traced the story of the bridge from John Roebling's entrepreneurial success in the fabrication of iron ropes, up to the end of the entire construction. The final part of the essay reflects on the idea of a Futurist bridge when it appeared in the paintings of Attilio Pusterla and Joseph Stella. While Manhattan buildings evolved in grand style, the Brooklyn Bridge highlights the city's continuing radical transformation, remaining always the same, and appearing in Walker Evans's photographs in 1929 as well as in the anonymous picture of the bred lines next to the bridge during the Great Depression. Especially Evans's picture shot underneath the bridge, so similar to Pusterla's painting, well described the contemporaneity of the bridge that nevertheless remained always the same, also when it was remodeled by David Steinman with a three lines roadway in the Fifties. With all these changes and no longer dominating the New York skyline, the Brooklyn Bridge continues to represent the modernity of the city as well as its past. 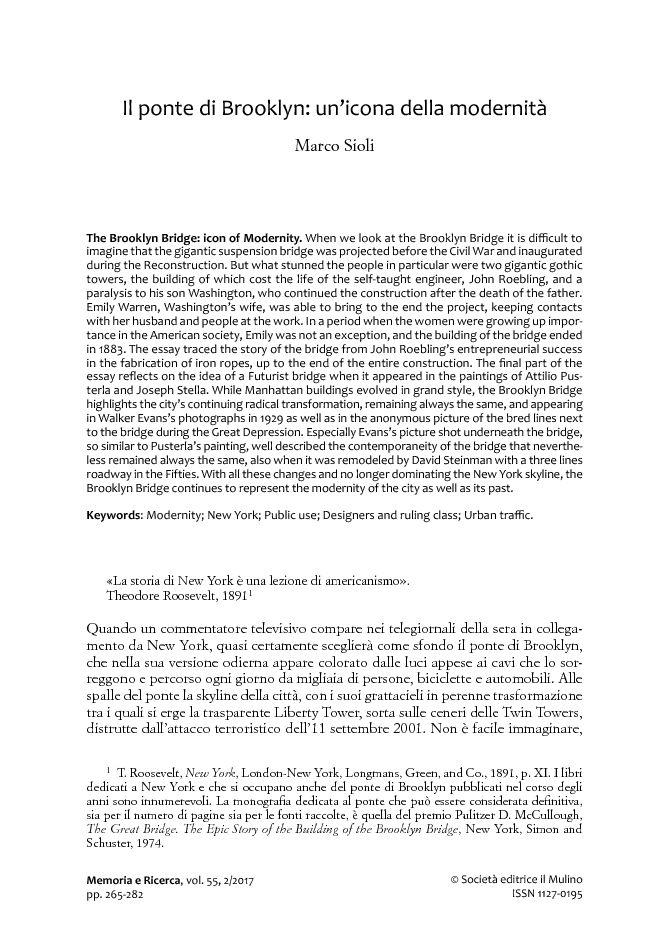