The aim of this paper is to investigate the logic, and therefore conceptual, determination of the Hegelian philosophy of art. In the last thirty years, the most part of the Hegelian scholars has tried to defeat the old image of Hegel as the «philosopher of aesthetic classicism». That image was based on the Hegelian alleged connotation of «beauty» as sort of empiric realization of the category of «appearance», explained by Hegel in the "Science of Logic". For that reason, Hegel's classicism was considered as part of the logic and systematic determination of art and his conception of beauty was understood as a kind of aesthetic Platonism. After the successful criticism of this position, however, the scholars tried to put aside all kind of discussion regarding the logic of the Hegelian philosophy of art. Instead, in this paper I aim to investigate the possibility of a logic, and in Hegel's sense a speculative, determination of art. At first, I will stress the connection between the Hegelian definition of the artwork and Kant's conception of reflecting judgement, in order to rule out the possibility of a relativistic conception of art. The art, in fact, can be justified only through the non-abstract relation between universal and particular, whose model is based on Kant's definition. Secondly, I will focus on the affinities between the aesthetic conception of beauty and the logic determination of «life». In this sense, the category of life, as it appears in the "Science of Logic", seems to explain the particular-universal relation exposed by the artwork in Hegel's "Encyclopedia". Then, for that reason, I'll propose to understand «life» as the non-abstract model able to explain the logic justification of the artwork. At the end, I'll specify the position of Hegel's philosophy of art in the context of the aesthetic thought of the so called "Goethezeit". 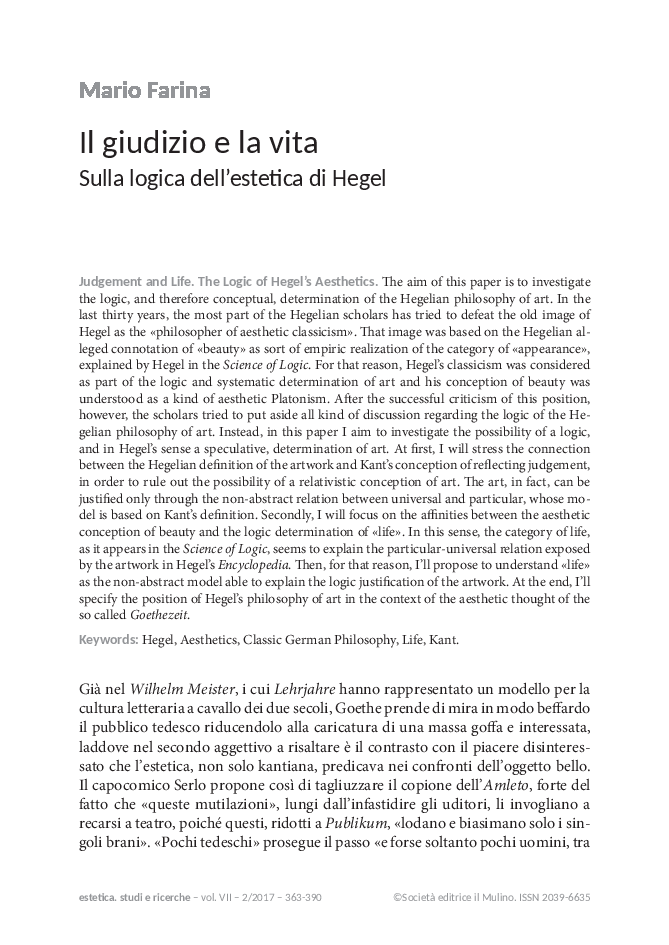