The article is a description and an analysis of the historiographical seasons from the Nineteenth years and moves from four different perspectives. The relationship between the Counter-reformation Church and the State of the Church are taken into considerations from the confessional rupture to the end of the confessional age, seen in the French Revolution and in the temporary end of the State of the Church in 1798. In the first perspective, the relation between State and Church are analysed in the light of the consequences for the ecclesiastical institutions and looking for the priority and seasons of the foreign policy. The second theme is connected to the peculiar system of government of the Papal State, State that knows phase of strong centralisation and the crisis of the medieval form of government, such as the participation of the Sacred College of cardinals in the main questions of the State; or the reduction of feudalism inside the territory of the State of the Church; or the administrative autonomy of peripheries. In the Roman system of government an important role is played by patronage, clientelism and nepotism from the confessional clash onwards. The nepotism system; the crisis of the synodal system of the concistoro; the bureaucratic procedures in the curia's recruitments were the main point developed by scholars. The third section offers therefore a quick analysis on the relations between centre and peripheries, between structures of government and local realities. In a fourth inhomogeneous section are collected multidisciplinary studies on the social aspects of the Papal State, or history of specific apparatus, or specific regulatory framework. 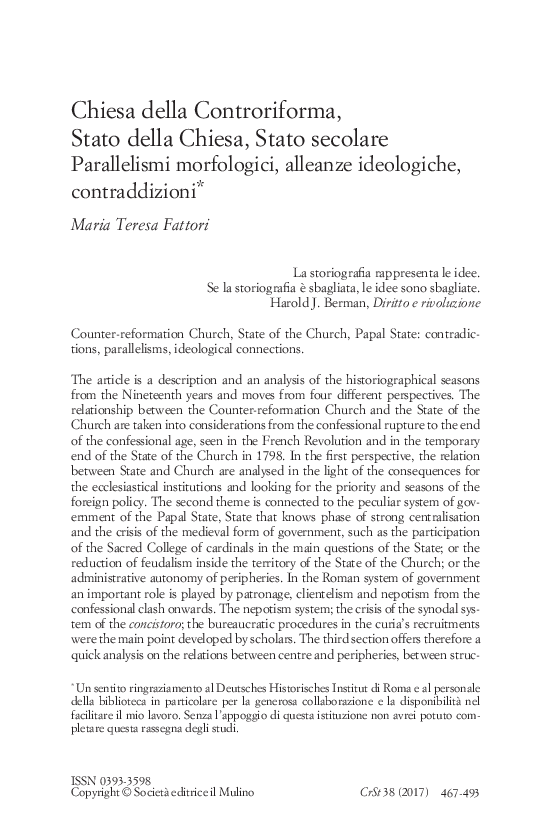