The application of the 1938 «racial laws» had a grave impact on Italian schools and universities. Expelled Jewish professors represented a great loss, whose expulsion brought serious consequences for the academic world. Many teachers were forced to leave Italy in order to continue their work, with some never returning. Giuseppe Levi, famous anatomist and esteemed professor at the University of Turin, was expelled along with some of his assistants. His experiences after 1938 are extremely indicative of the situation that was created. Indeed, they prove how difficult it was for expelled professors to find work abroad, leave Italy, or resolve bureaucratic issues. From testimonies written by his daughter, Natalia Ginzburg, and his students, from letters Levi wrote and received in correspondence with his son Mario, exiled in France, and from archival files, it is possible to understand how much and how fascism and the application of the «racial laws» affected professors, both as private individuals and academics. Giuseppe Levi, who always remained antifascist, was forced to make difficult decisions in order to continue his work as early as 1931. That year he took the oath of allegiance to the Fascist regime imposed on University professors and later, in 1939, he moved to the University of Liege, where he was caught off guard by the German invasion. He managed to return to Italy in 1941 and ran the risk of being deported after 8 September 1943 when the Armistice was made public. After the war, he again attained the chair in Turin, where he lived for the rest of his life. The common thread of Professor Levi’s story during the seven years of his forced exile from university in Italy was his strong determination to continue his research and teach, precisely at a time when such work, subject to anti-Semitic policy, was not considered a priority by the regime 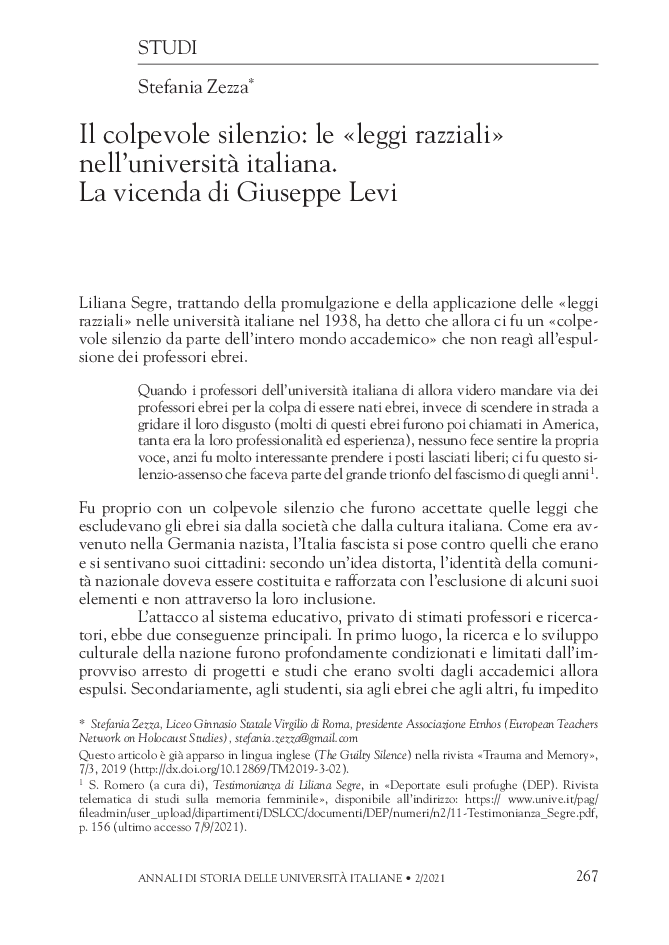