The popularization of information is one of the most remarkable changes undergone by journalism in the past twenty years. Among the factors most decisive for the popularization of the information system is the tendency to narrativize contents and, in general, the architecture of information flows. On these premises, the research described by the article investigated the visibility and contents of the dominant narrative furnished by the press system in Italy in regard to the economic and financial crisis triggered in the USA during 2008 by the bankruptcy of Lehman Brothers. The analysis, conducted on the time-span September 2008/December 2011, examines the propensity, extent, and forms of popularization of a traditionally «hard» topic but which, in the medium period, acquires exceptional features suited to spectacularization. The first step of the research consisted in quantitative analysis of the visibility trend of narration of the crisis by the main daily newspapers (Corriere della Sera, la Repubblica and La Stampa) and by the most important weekly news magazines (L'Espresso and Panorama). The second step consisted in analysis of the narrativization of the information flow produced by the press using the event/controversy/theme sequences model of analysis. The research identified the presence of five levels of popularization of the crisis: the first, correlated with the coercion of media logic and the main narrativization strategies employed by journalists, the second deriving from the framing of the theme, the third from the didactization of the contents, the fourth from the entertainmentization of the object «crisis», and the fifth from its lexicalization. 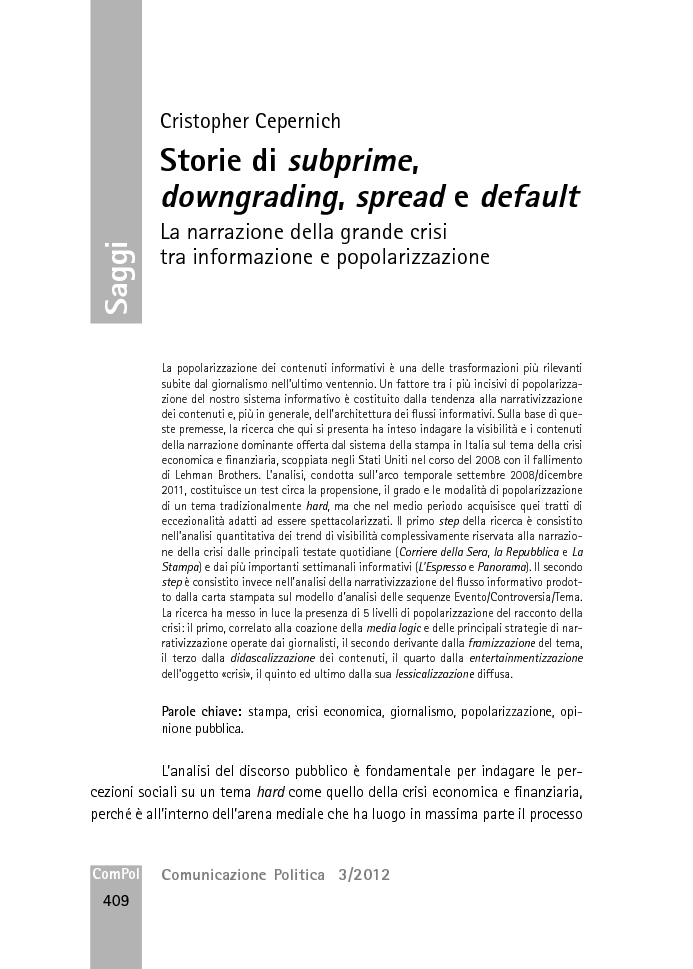