The essay is aimed at illustrating the hidden philosophical anthropology proposed by German legal and political philosopher Carl Schmitt. Schmitt’s anthropology has always been understood just as the basis of a political philosophy dominated by the friend-enemy opposition. However, such an interpretation usually undermines other aspects, which still represents a neglected path of research. A closer interpretation of Schmitt’s intellectual and conceptual relations with German Philosophische Anthropologie (Helmuth Plessner and Arnold Gehlen) could highlight these aspects. The paper is structured as follows: in the first part, I summarize the canonical approach to Schmitt’s political anthropology; in the second part, I explain why the doctrine of the four elements is highly relevant for Schmitt’s philosophical anthropology; in the third part, I argue that Schmitt’s metaphysics of elements is strictly linked to his philosophy of technology; in the fourth part, I analyse a few conceptual problems that emerge from this interpretation; in the last part, I summarize the results of the essay and suggest a new line of investigation. 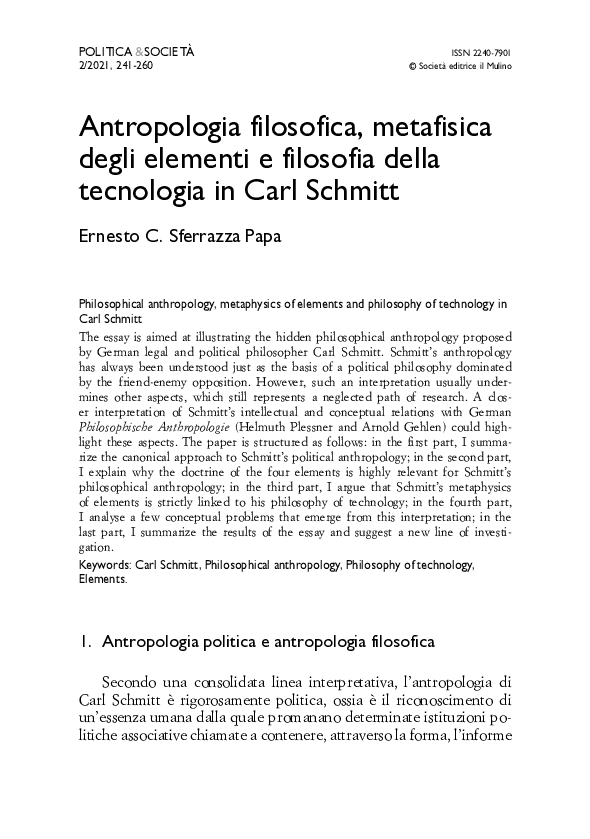