Since the financial crisis that hit in the summer of 2007, which spread in Europe between 2008 and 2012, the world has been dominated by growing uncertainty. The economic crisis has been worsened by the SARS-CoV-2 pandemic and the climate/ environmental crisis, which are still raging. War – which never really disappeared after the collapse of the Soviet Union and the end of the Cold War – has tragically returned to Europe with the conflict in Ukraine. Because of the combination of these phenomena, uncertainty is an increasingly central issue in the economic and political debate, and in the philosophical, sociological and psychoanalytical reflection. It is not, however, the first time this has happened in the last hundred years: in fact, between the two world wars, the problem had already attracted the attention of leading economists. By analysing the important role uncertainty plays in the thought of J.M. Keynes, and in the economic policies inspired by him (full employment, Welfare State, income policies, etc.), the article takes up and broadens the concept of “political economy of uncertaintyµ proposed by Z. Bauman to define contemporary society, in particular stressing how uncertainty is employed as a technique for governing the labour force, the psychopathologies of temporary and unprotected work. Finally, the article traces some institutional alternatives to neoliberal capitalism and its crisis. 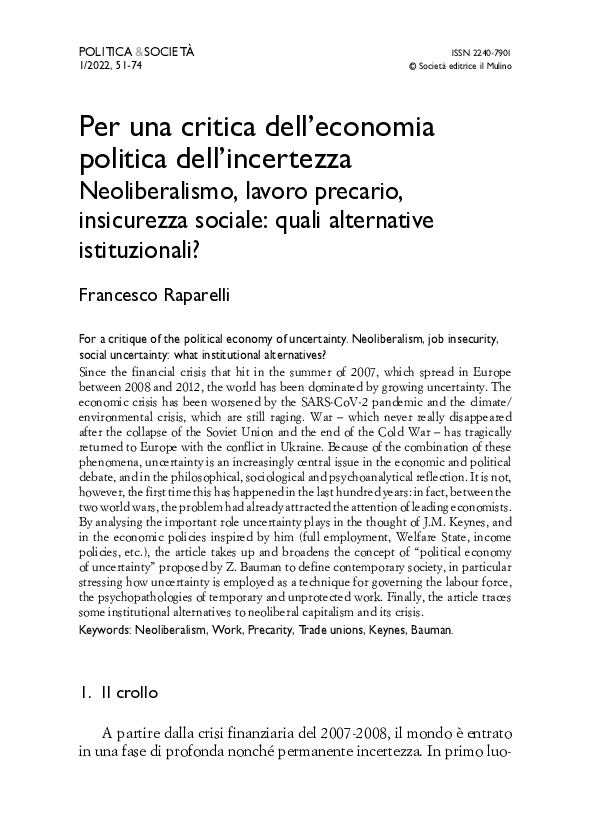