During the last decades, the devolution of many political powers from the state to the local governments has strengthened the role of the Italian municipalities in the provision of rights both for citizens and non citizens. As a consequence of this decentralization process, many rights recognized by the national laws can be concretely exercised only at the local level. The bond between the individuals and the territory, thus, has become increasingly important. This bond is formally embodied by the legal institute of "residency" - that is the enrolment into the registry office of a municipality -, given that, according to the Italian laws, the actual access to many rights is restricted to whom is enrolled. It is not a surprising fact, therefore, that, during the last years, many Mayors have tried to restrict the access to residency by means of administrative provisions as well as through informal practices. Migrants are the main target of these exclusionary strategies. For this reason, the local control on the enrolment increases the level of "civic stratification": besides the legal status, also the ownership of residency fragments the local population in different strata. Against the local exclusion provoked by the Mayors' strategies, the idea of "ethical territoriality" suggested by Lynda Bosniak could work as a critical tool. More specifically, this idea could be invoked as a normative principle to claim rights and recognition at the local level. At the same time, a local perspective could make this principle more operational: starting from the local territories, the claim for rights and recognition can become more concrete and be extended to the national level. 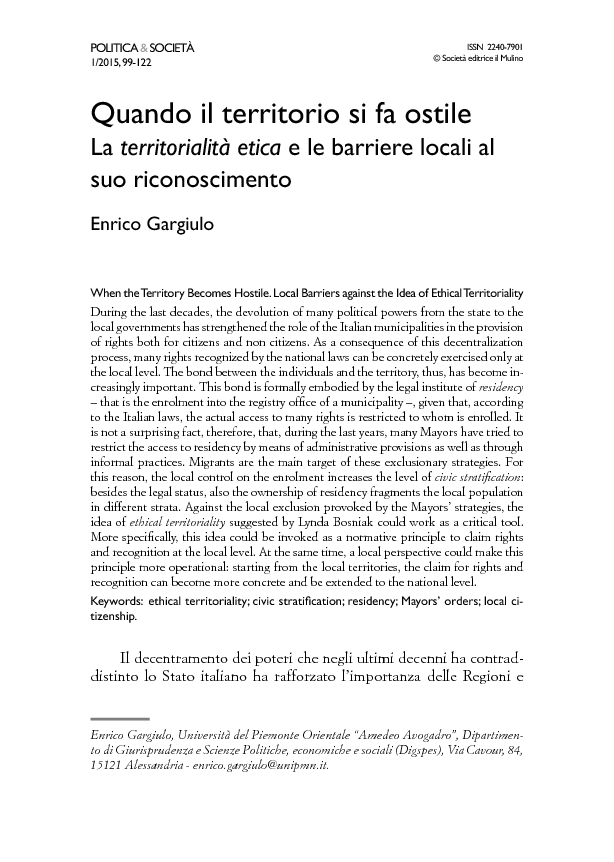