I argue that contemporary critical theory needs the conceptual tools of social ontology in order to make its own ontological commitments explicit and strengthen its interdisciplinary approach. On the other hand, contemporary analytic social ontology needs critical theory in order to be able to focus on the role that social change, power, and historicity play in the constitution of social facts, and to see the shortcomings of an agential and intentionalist approach to social facts. My thesis is strengthened by a historical reconstruction of the presence of two different approaches in the original program of the family of critical theory apparently most hostile to social ontology, (the Frankfurt School), namely Horkheimer's program of a critical social philosophy which includes a social ontology, and Adorno's negative attitude towards it, epitomized by the paradoxical notion of "ontology of the false state". Adorno's negative attitude was later inherited by Habermas and Honneth, whose work I show to be nevertheless deeply laden with ontological commitments. I then argue that, if one accepts the socio-ontological redefinition of critical theory, then the post-metaphysical paradigm adopted by Habermas should be revised and a certain conception of the linguistic turn in the understanding of social action abandoned. On the side of contemporary social ontology, the impulse coming from critical theory should allow us to distinguish between forms of "traditional social ontology", that simply apply ready-made general metaphysical concepts to social reality, and a "critical social ontology", oriented to socializing ontology and critically transforming metaphysical categories. 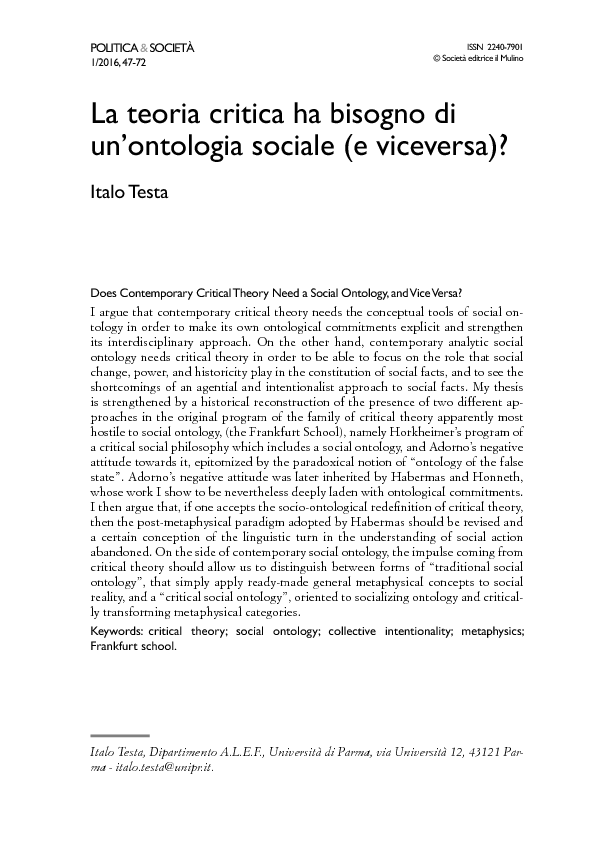