The paper outlines the conceptual framework of Neoliberalism in its original form: the one that developed - between the 1930s and the 1960s - from the debate between the German Ordoliberals and the Austrian school of Ludwig von Mises and Friedrich von Hayek. The aim of the paper is to demonstrate that within this initial framework Neoliberalism not only defines a specific concept of government and economy, but, in fact, implies a new framework of civilization. This framework attempts to respond to the crisis of modern society which, during the same decades, has been discussed in dramatic terms by several protagonists of European culture. This profound dimension of the neoliberal project has been overlooked for a long time, however, it is an essential key to the understanding of the extensive success of neoliberalism after the 1980s as well as the reasons that are causing its failure today. Although the Ordoliberals' explicit purpose was to fight the trends of refeudalization that they considered latent in market economy, with time neoliberal policies have instead promoted and amplified boosts towards refeudalization. This development stands in explicit contrast to the tendencies towards pluralism that are emerging within today's global society. The antithesis between refeudalization and pluralism not only signifies the failure of neoliberalism, but also imposes itself as the primary form of social conflict in the contemporary world. 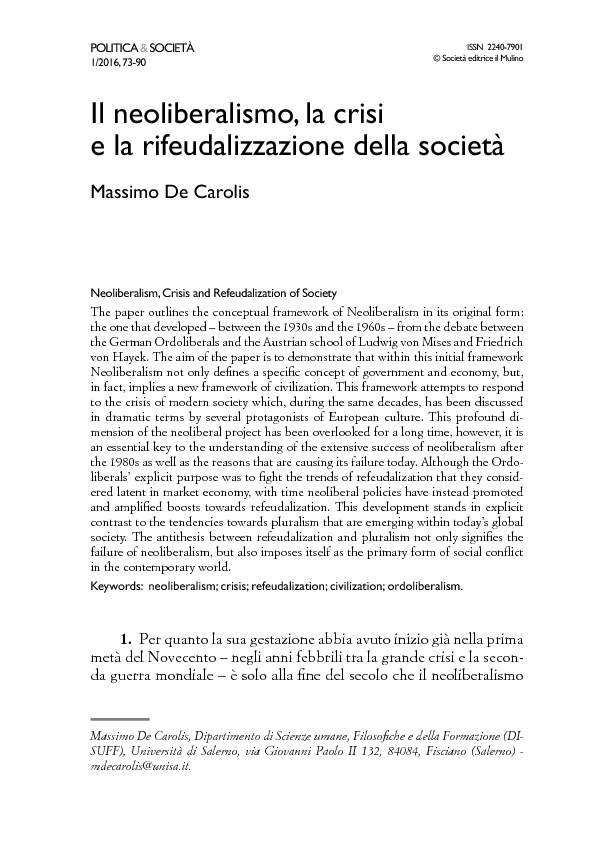