This article discusses the recent emergence of postcritical approaches in a variety of disciplines, and mostly (for present purposes, at least) in literary studies, anthropology and political philosophy. Although it is not uncommon to read of a turn - if not the turn - to postcritique, more than one farewell to traditional social criticism is at stake, and more often than not bearing little resemblance to each other in terms of both methodology and content. This is why, by focusing on the different ways in which they relate to traditional critique, three influential postcritical approaches will be considered in some detail and regarded as somehow exemplary of more general attitudes towards the enduring legacy of critical thinking in social sciences: Rita Feslki's "affective turn" as sketched in her "The Limits of Critique" (2015) (postcritique as a refinement of critique), Bruno Latour's ethnographic and philosophical theorizing (postcritique as a replacement of critique) and Davina Cooper's imaginative thinking as developed in her "Everyday Utopias" (2013) (postcritique as a correction of critique). It will be my claim that, while some criticisms to key aspects and strategies of traditional or mainstream critique (as well as the need to reassert the relevance of a more comprehensive form of critical inquiry and to revive its waning fortunes) are quite right on target, there is no need to go beyond the horizon, properly expanded, of critique for effectively empowering settings and agents for social change. 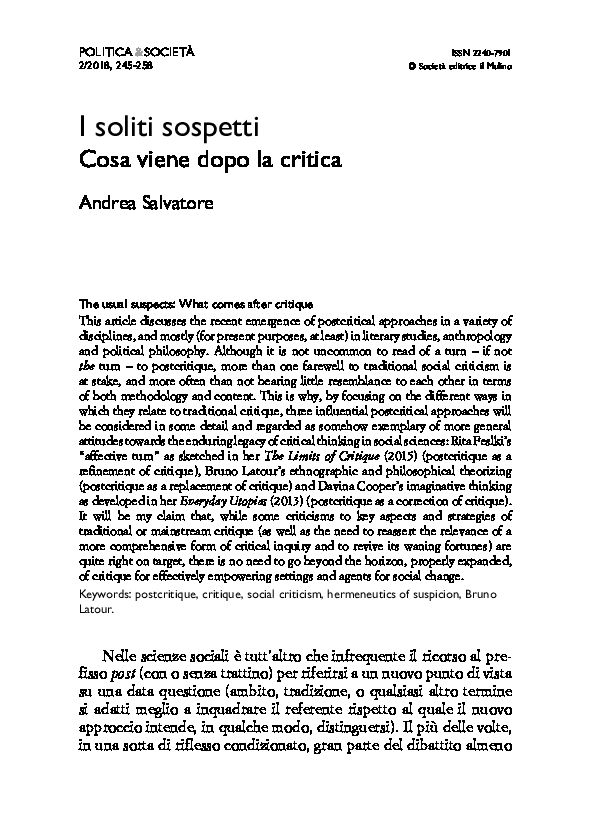