The debate on mediation and ADR has become particularly intense in Italy, since the Italian Legislative Decree No. 28/2010 established, in certain areas of civil and commercial law, that the judicial procedure must be mandatorily preceded by mediation proceedings. This legislation has attracted much criticism from all areas of the legal profession, confirming that it is not easy to remove mistrust and hostility ingrained in professional practice and in well-established cultural concepts. The recent intervention of the Constitutional Court seems to mark a setback in the development of the Alternative Dispute Resolution movement in Italy. The Court, in Judgment No. 272/2012, found the mandatory mediation process to be unconstitutional due to a lack of legislation (a Legislative Decree is an act adopted by the Government by a delegation of Parliament). This article seeks to demonstrate, in the wake of the experience of other countries, especially the United States, how the success of mediation does not depend only on legislative solutions, but also has to pass through broader cultural processes that provide greater involvement of the professional category of lawyers. The presence of legal experts, who assist the parties and chair the mediation process, is a necessary factor that enables the parties to address the ADR procedures in full awareness. From this point of view, the distinction between the so-called «interest-based system» and the «rights-based system» of mediation should be considered improper, because this distinction suggests rights and interests are separate worlds. It is paramount that each mediation model always considers the legal implications of the dispute among the other factors. Cultural processes require not only the professional training of lawyers, but also the adaptation of the legal training programs of law schools. This is the only way to overcome the primacy acquired over time by the state model of iurisdictio, which is «adversarial» since it provides that the dispute resolution is referred to an impartial third party. 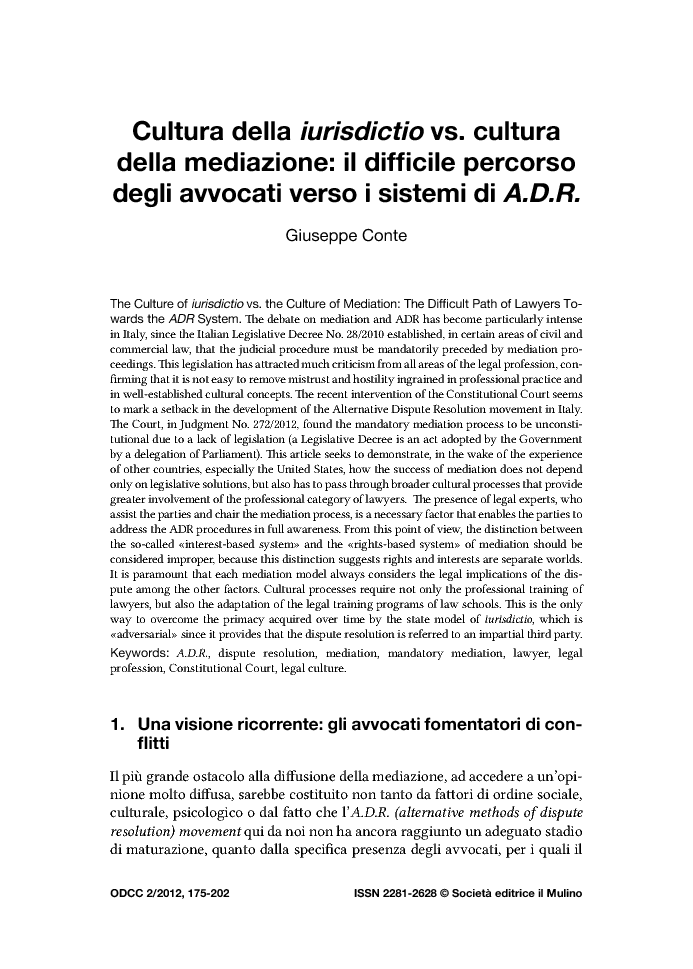