Italian administrative law, along a line first drawn by the European directives on public procurements, has introduced quite a remarkable kind of relationship. As per Section 49 of the Code on the Public Procurements, an economic operator may rely on the economic, financial, technical and logistic capacity of other entities regardless of the legal nature of the relation which it has with the latter, for the purpose of meeting the requirements commanded by the public contracting authority. This relationship is called «avvalimento». The procedure drawn up by the Code commands for a first step featuring general contract law facets: the economic operator shall file with the contracting authority the agreement whereby another entity undertakes to lend to the competing entity its capacities and to make available these resources for the entire duration of the public procurement. Case law has qualified the so called contract of «avvalimento» as an atypical contract mirroring the characteristics of «mandate», or, as an alternative, recalling the more traditional schemes of the purchase agreement or lease agreement of a business concern, the deposit, the financial lease, the consortium, the contractual joint venture. Scholars, on the other hand, have focused on the inner structure of the agreement, giving consideration to the legal effects produced on the contracting authority, and have consequently called forth the structure of the «contract in favor of third parties», the cumulative external assumption of debt, the «promise of the fact of the third party». The contract of «avvalimento» as such, is however not recognized by the law. Section 49 of the Code on Public Procurements and Section 88 of the Regulations thereunder (DPR 5 October 2007, No. 110) spell out very minor requirements of this contract and command to market operators a task which is at the very opposite of the task of qualification, that is the task of verifying that a certain agreement, of any kind, so long as valid and enforceable, features such elements and could therefore be validly submitted to the contracting public authority. Such minor requirements encompass the scope of the contract, which can never be merely determinable but rather well determined, if not overly determined, along the very same content drawn up for consumer contracts. In addition, the contract duration must tally with to the length of the works for which the public procurement was set up, leaving the loophole of the validity of an anticipated termination provided under general civil law principals. The commingling between public and private law calls for the further question as to the admissibility of a «naked» contract that is a contract of avvalimento setting out solely the aforementioned requirements: the answer to this question should be drawn from the standpoint of the contracting authority, which should indeed be entitled to decide over the cause of the contract justifying the involvement of the lending entity in support of the competing entity. A contract , however detailed, that would only set out the scope and duration of the «borrowing », would not serve the best interest of the public contracting authority. 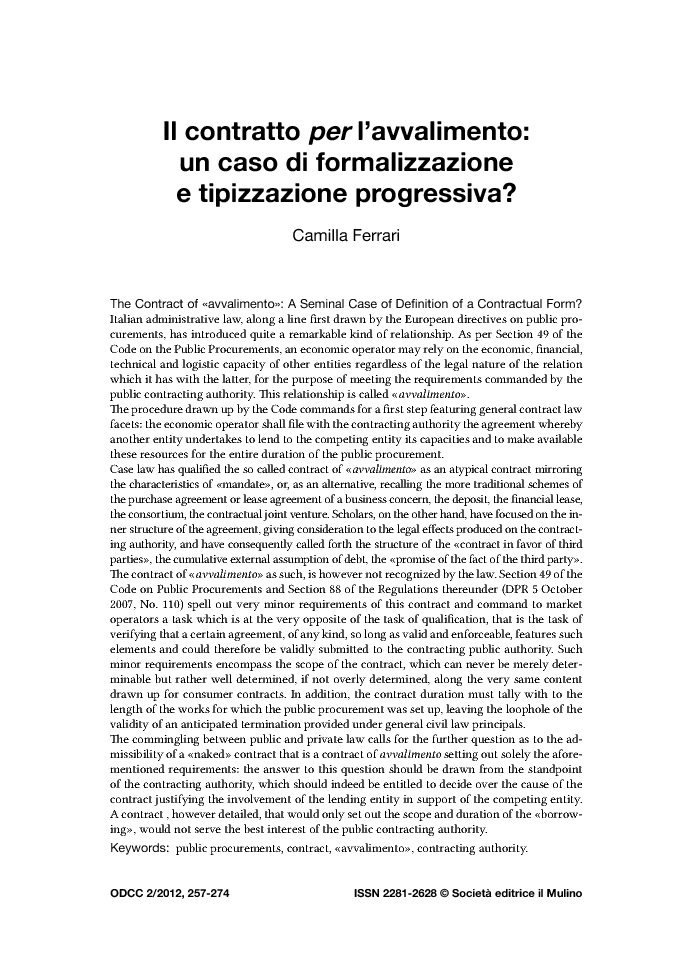