The regulation on financial collateral agreements, provided by Directive 2002/47/ EC (so called Collateral Directive) - put into force in the Italian legal system by legislative decree n. 170/2004 - contains specific rules inspired by a principle opposite to that found on the ground of the prohibition of patto commissorio (art. 2744 c.c.). The above disposition states, in fact, that a creditor cannot become owner of a certain item with the sole purpose of covering the performance of the obligation. Thus, ownership of the collateral cannot pass to the creditor if the debtor fails to honour his debt, out of a legal procedure led by the judicial authority. Instead, European regulation aims to encourage creditors to lend money by allowing, on the one hand, parties to agree on title transfer financial collateral agreements - whereby the ownership of the collateral passes to the creditor - and by providing, on the other hand, the creditor with special tools for obtaining satisfaction should the debt not be repaid. In the event of default, the creditor can appropriate the collateral and give the debtor the difference between the value of the collateral and the outstanding sum incurred by the debtor himself. Therefore, the implementation of the Directive in the Italian legal system has created a specific area - related to financial collateral - in which the prohibition of patto commissorio is ineffective. Furthermore, this European regulation is the expression of a trend favouring self-help remedies for the creditor, who can - if the debt is not paid - sell or appropriate the collateral, subject to the condition that he will give the debtor the difference between the price obtained (or the value of the collateral) and the amount of the debt. The challenge for the Italian doctrine shall therefore be to examine whether the above self-help remedies could be granted in every case in which the value of the collateral can be determined according to objective criteria, such as whether the collateral consists of currency, receivables or financial instruments negotiable in the market. 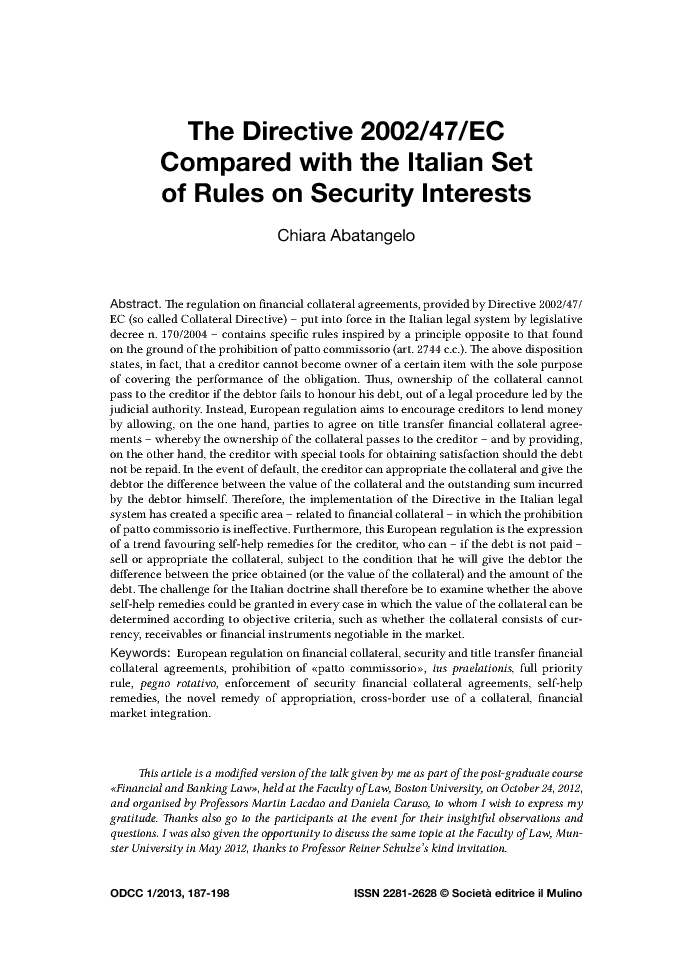