Liberal internationalism is based on four elements: democracy, free trade, collective security, and American leadership. Altogether, they represent the building blocks of global peace – at least, this was the view of Woodrow Wilson after WWI. A liberal order – in its most institutionalized form so far – was designed at Bretton Woods in 1944, and it has been in place for the rest of the 20th century. The American-led order is now increasingly questioned and challenged. This paper looks at the ‘free trade’ component of Wilsonianism, currently threatened by rising protectionism and the return of geoeconomics. The apparently declining support of free trade in global politics originates in two current interrelated dynamics. On the one hand, a relatively declining United States seems reluctant to keep offering free trade as a public good, while feeling threatened by a rising China which has a different vision of the order. Can the global free trade regime survive without the American leadership? On the other hand, neoliberal hyper-globalization – through the widespread diffusion of global value chains – has changed the nature of international trade, which is having a deeper impact on domestic societies, generating a populist backlash. What are the implications for the sustainability of the liberal order? The paper argues that the future of free trade as a pillar of liberal internationalism depends on (i) accepting China as a contributor to a 21st-century style re-designed liberal order and (ii) readdressing the excesses of globalization. 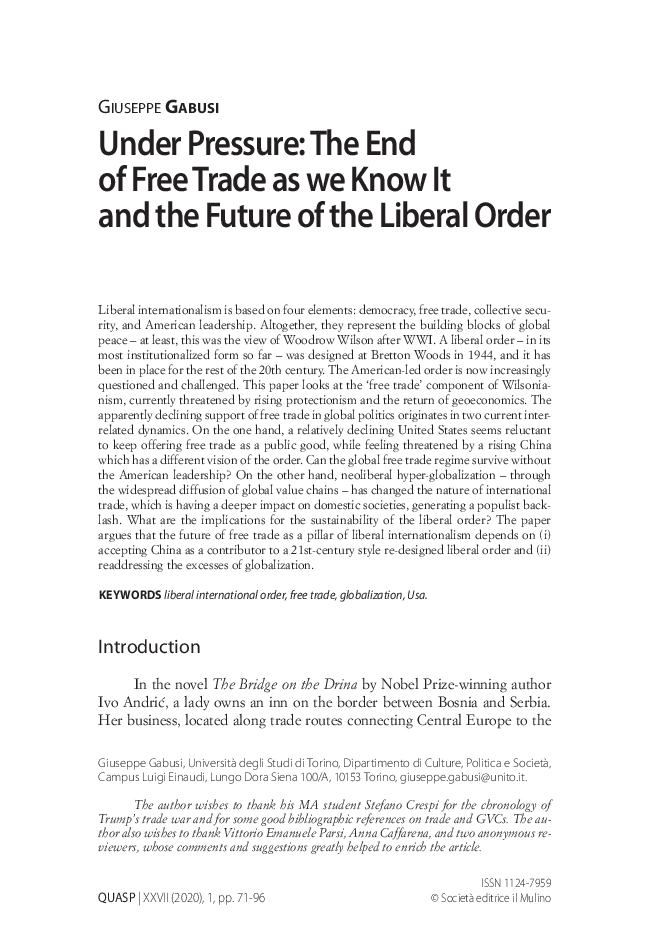