The article seeks to examine the female voice empowerment in the rewriting of the Odysseus and Penelope myth described by Homer in "The Odyssey" from the perspective of Penelope in Margaret Atwood's "The Penelopiad" (2005), as well as several other contemporary literary Penelopes. Loyalty within the "oikos" is addressed, since Odysseus's punishment of unfaithful subjects is performed through bloody actions under Odysseus's orders in his palace. Twelve maids from among his fifty servants have shown disrespect to Penelope and her son Telemachus during his absence, by becoming concubines of the Suitors, thus violating their "oikos" duty of sexual fidelity towards their patriarch and king. The question of violence, as exemplified by Odysseus's hanging of Penelope's servant maids, is given special attention in the essay and the reasons for this severe punishment for their sexual 'betrayal' are speculated upon from the comparative literary point of view and the gender distribution of social power. This is the main theme of Atwood's rewriting of the ancient Greek myth along with her formal innovations, such as, for example, the introduction of the Greek chorus. Some of the recent modern versions of the Penelope myth are also discussed in relation to Atwood's Penelopiad. 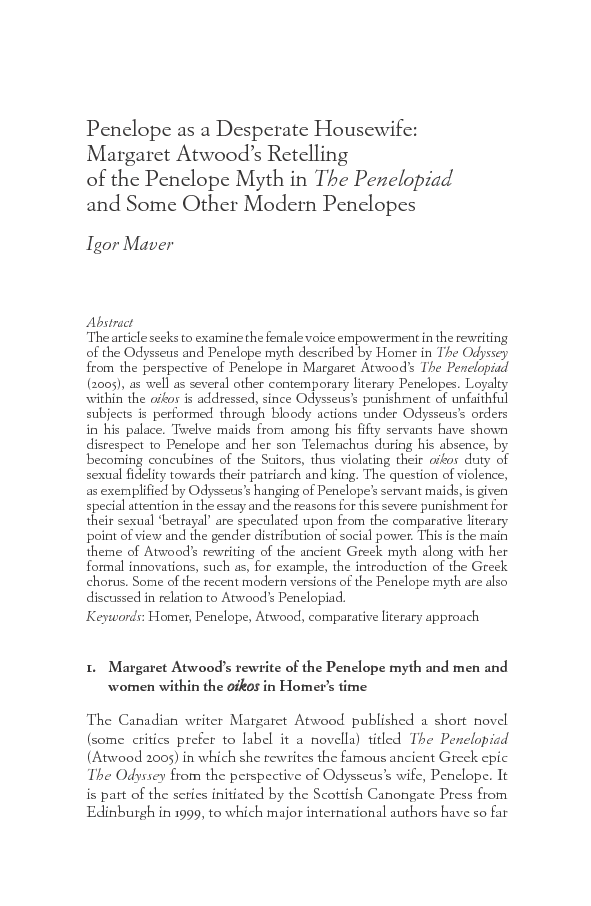