This paper proposes an analysis of Anil’s Ghost (2000) by Michael Ondaatje in the attempt to overcome a marginalisation of Sri Lankan literary production, both in the canon of the contemporary South Asian novel, and postcolonial criticism. The novel is set in a Sri Lanka ravaged by the civil war between Sinhalese and Tamils that plagued the country for about a quarter of a century. The war represents a pivotal historical and political circumstance that has attracted the attention of many Sri Lankan literary authors for the last 30 years. Such scrutiny sometimes put in the foreground the active influence that past events still exert in the present, an influence that is often invisible, hidden or neglected. This is also true for Ondaatje. The author chooses to focus on the investigations of a forensic anthropologist who has returned from the United States to her native Sri Lanka in order to recover the identity of a skeleton abandoned in a zone protected by the government. In her surveys to solve the mystery behind the identity of the nameless victim, and uncover the truth about the mass killings plaguing the region, not only does Anil’s quest represent a new generation’s attempt to give voice to the voiceless victims of wars and national conflicts but also provides her author with a narrative space made of voids, gaps and blind spots. Attention to such narrative breaks provides space for truths that prove essential to making visible those unaccountable processes through which social authorities and symbolic formations interacted during those warring years. Following Jacques Derrida (2016) and Homi Bhabha (1990), the aim of my paper consists in showing that Ondaatje’s novel belongs to a wave of literary fiction concerned with (and even haunted by) the ‘ghosts’ produced by the violence of the recently ended war. In Ondaatje’s literary effort the Civil War works as a moment of temporal negotiation, whose dreadful events are used to highlight the need to recover history in the clash between historical happenings, subjective experience and the distortions of memory. 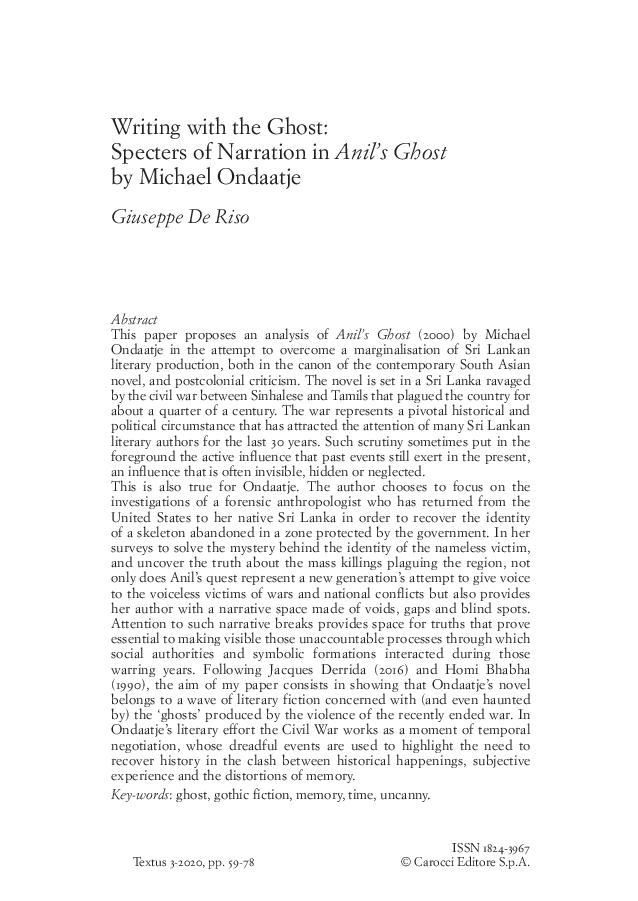