In continuity with the postcolonial socially concerned agenda and the modernist roots of the genre in the 1930s, a streak of the Indian postmillennial novel confirms its vocation as a concerned form of cultural activism. Within this trend, we find The Ministry of Utmost Happiness by Arundhati Roy (2017). The novel weaves together the stories of a whole universe of people and follows their efforts in creating and defending their community against communalism in a country which is increasingly suffering from internal factionalism. In particular, the narration intersects the characters’ destinies with some of the gloomiest and murkiest episodes of contemporary Indian history. Continuing in fictional terms her life-long commitment against neo-liberal economic globalisation and the threats the rise of Hindu nationalism poses to democracy, Roy confirms a gift for storytelling which is genuinely, and almost daringly, literary. The aim of this paper is to assess not only the breadth of this novel’s capacity to tackle thorny political issues, but also to account for its quintessentially artistic devotion to stylistic expertise and original rhetorical proficiency, demonstrating once again the capacity of creative writing to develop social and moral worldviews through its formal experiments. 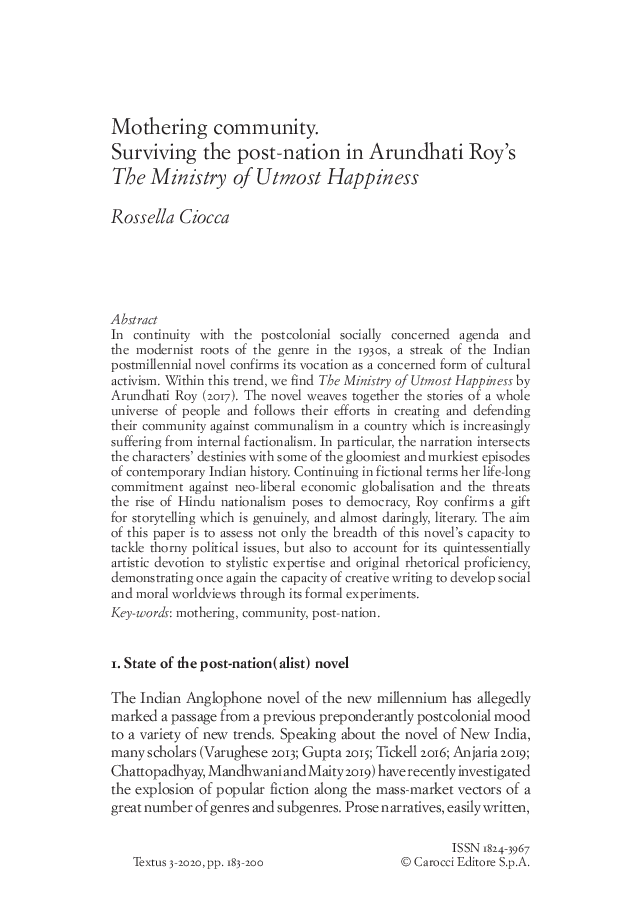