After reconstructing the history of the Castle of Gambatesa, from the Norman age to the XVIIIth century, and the history of the di Capua family, who owned it from 1495 to 1583, the essay aims to illustrate, room after room, the cycle of frescoes that decorate the main floor of the castle and to take stock of the personality of its author, Donato Decumbertino, an artist so singular, as mysterious, of which we ignore the place and date of birth, the other works he has accomplished, as well as place and date of death. As we learn from the inscriptions painted in two rooms, Vincenzo di Capua in 1550 had Donato Decumbertino perform a cycle of frescoes inspired by the most updated models of Naples and Rome, which celebrated his virtues of government and the nobility of his ancestors. The inscriptions make it clear that contrasts arose between the painter, who proudly claims the entire authorship of the work, comparing himself to a spider who weaves deceptive plots and an eloquent parrot, and the patron who imposed a humiliating rectification, perhaps mediated by the advisor for the iconographic program, that I suppose could be Pietro Antonio, Vincenzo!s younger brother and cultured archbishop of Otranto. The analysis of the cycle provides new confirmations of the belief that Donato attended Giorgio Vasari in Rome, perhaps after meeting him in Naples. He shows that he knew models and drawings of Vasari's works between 1546 and 1551, including the Sala dei Cento Giorni, in whose execution he perhaps participated. The frescoes indicate that Donato loved to amaze the observer with ingenious optical deceptions, faking architectural frames, pergolas, fluttering curtains, loggias overlooking large landscapes with ruins in Flemish style, friezes and vegetal swirls with fruit, flowers and birds, imitated with surprising naturalism. He loosely sacks the Flemish engravings and is inspired by Michelangelo, Perin del Vaga, Giovanni da Udine and other artists active in Rome in the first half of the 16th century. Among the article's novelties are the identification of the myth of the construction of the Labyrinth in Crete, with Pasifae coveting the white bull, and the unmasking of the ease with which Donato designates with the inscription Prudencia a Virtue which actually has all the attributes of a Hope. But the biggest novelty is the identification in many rooms of Gambatesa of the hand of a brilliant collaborator of Donato, to whom is also attributed the later frieze that decorates a room of the Apartment on the second floor. Finally, the recent attribution to Donato of a God the Blessing Father in Casacalenda and a St. John the Evangelist in San Martino in Pensilis is rejected, proposing as author Gianserio Strafella, a brilliant Salentine painter active between 1548 and 1573, and it is also attributed to Donato's anonymous collaborator the frescoes with Biblical Stories in the crypt of St. Adam in Guglionesi, datable around 1587, suggesting the hypothesis that Donato's Anonymous collaborator concluded the cycle of Gambatesa, taking over from the master, perhaps even dead. 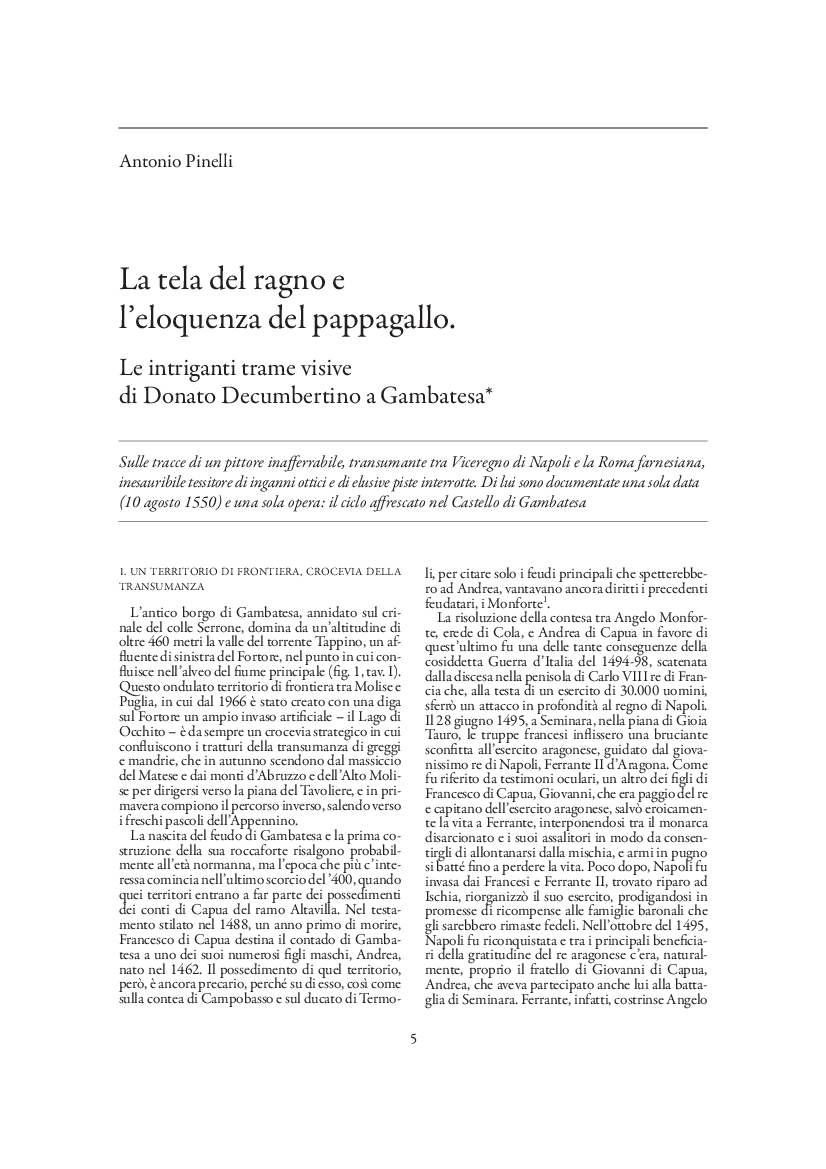