The paper aims to study the role of the politicization of the lower clergy during the Neapolitan revolution of the 1820-1821. Traditionally legitimist, the lower clergy is a widely-represented component of the revolutionary sphere, but its role has been neglected by previous works, which have shown more interest in the involvement of soldiers and administrators in the revolution. The national or provincial police sources and the very rich literature of liberal memoirs dwell instead on the massive participation of the Carbonari movement and their role in spreading the revolution through preaching and mass. Moreover, their dual function as priests and schoolmasters contributed to the politicization of the ordinary stakeholders, allowing Carbonari priests to teach revolution to the local communities. Their decisive role as intermediaries of the revolution and their role in the construction of the liberal political convention will be studied through the cases of the provinces of Avellino, Cosenza and Salerno, which are the most documented. This process was part of a broader conception, promoted by the 1812 Cádiz Constitution, of liberal community as a «Catholic nation». This vision of society and politics was shared with all the European and American states that came under the influence of that legislation around 1820. The political involvement of clergymen heralded the building of a liberal political religion, which was to have repercussions in the kingdom's later evolution. 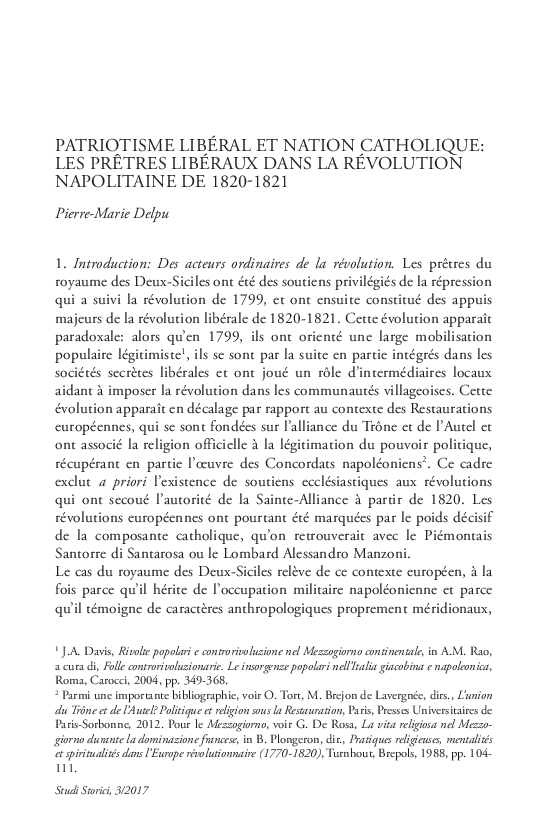